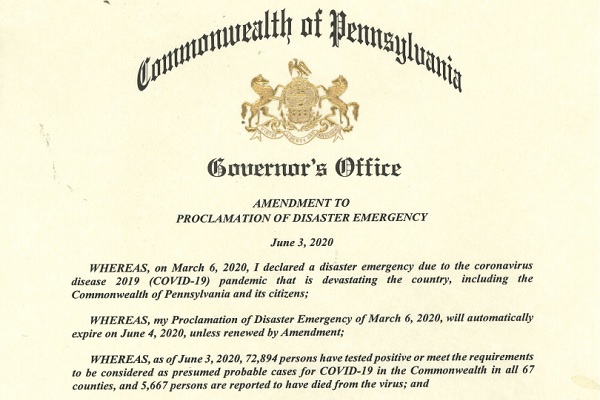 Harrisburg, PA (AP) — Democratic Gov. Tom Wolf and the GOP-controlled Legislature are heading toward a legal clash over the emergency declaration he issued at the beginning of the pandemic.

Lawmakers voted to end it, Wolf insisted he holds veto power and business owners are left in limbo.

Republicans asserted their resolution paves the way for businesses that have been shut down under Wolf’s pandemic restrictions to reopen. Wolf says it does no such thing. Their dispute quickly landed in court.

Continue reading to see arguments from both sides.

Last night, the General Assembly voted to end the disaster declaration with many members claiming their actions ended the business guideline orders. That is not true. Not only does any concurrent resolution need to come to the Governor for approval or disapproval, but the disaster declaration is separate from the orders signed by Secretary of Health Dr. Rachel Levine under the Disease Prevention Act that include provisions for business reopening and for worker and building safety. Those orders remain in place. The legislature did nothing to end those.

Rather, the legislature chose to attempt to end the disaster declaration – a measure that would ostensibly end protections passed for businesses, workers, and residents.

If the declaration were to end, these protections would go away:

• Burdensome eligibility requirements for more than a million Unemployment Compensation claimants would immediately go back into effect, and employers across the commonwealth would no longer receive relief from charges.

• Certification requirements under the public-school code and child protective services law would end.

• A school meal eligibility waiver, which has allowed more than 300 meal sites to open for distribution of food to school-age children in need, would end.

• Telehealth and other health care services provided by out-of-state providers for Pennsylvanians would end.

• Utility assistance for thousands of families and individuals would end, leaving people without water or electricity.

• Hospitals and alternative care sites would no longer be able to add capacity or repurpose facilities (i.e., beds) without having to abide by the 60-day notice requirement.

• License renewal and training requirement suspensions for health care professionals, child care workers, direct care workers, direct support professionals, among other professional groups who provide life sustaining services to our children, seniors, and vulnerable residents would end, meaning all of these workers would need to choose between not returning to work until those credentials could be renewed or trainings completed and the option of returning to work with the understanding that they are practicing out of compliance with Pennsylvania law and regulation, very well opening themselves up to personal liability.

• PennDOT waivers for commercial motor vehicle weight limitations and permitting requirements for the transport and delivery of agricultural feed, food, and dairy products, fuel, pharmaceuticals, and medical supplies to assist in supply chain challenges would end and motor carriers would be restricted in their ability to directly assist in supporting emergency relief efforts necessary to respond to the pandemic.

• Mortgage foreclosure and eviction moratoriums that offer protection to vulnerable Pennsylvanians at risk of losing their homes during the pandemic would end.

In addition to these immediate waiver and legislative enactments being removed, ending the disaster declaration also would remove many practical aspects of the state’s response to this disaster, including the authority to activate the National Guard to help with nursing homes; deploying commonwealth personnel, services and distributing supplies and equipment; implementing emergency funding; suspending rules and regulations that would hinder or delay necessary action in coping with the emergency; and using all available resources of the commonwealth government and its political subdivisions to deal with the emergency.

During a state of emergency declared by the governor, commonwealth agencies and departments may implement their emergency assignments without regard to procedures required by other laws pertaining to performing their work, entering into contracts, purchasing supplies and equipment, and employing temporary workers.

“The emergency services law is clear. Upon passage of a concurrent resolution terminating a disaster declaration, the governor is required to issue a proclamation ending the disaster declaration. The Pennsylvanian Supreme Court solidified this position in a ruling earlier this year, stating the General Assembly has the ability to terminate the order at any time.

“As evidenced by the bipartisan vote in the House and Senate, ending the declaration now is in the best interest of ensuring Pennsylvania can recover effectively and efficiently. If the governor chooses to openly violate the plain reading of the law, we will examine all legal actions available to us to act in the best interest of the residents of the Commonwealth.”

Harrisburg, PA – Noting that Gov. Tom Wolf has refused to carry out his mandatory duty to act upon a resolution passed by the General Assembly that ends his emergency declaration, Senate President Pro Tempore Joe Scarnati (R-25) and Senate Majority Leader Jake Corman (R-34) on Wednesday urged the state’s Commonwealth Court to “command” the governor to terminate the declaration in accordance with the law.

“Governor Wolf’s failure to issue an executive order or proclamation ending the COVID-19 state of disaster emergency is unlawful, unreasonable, and without just cause,” the lawmakers said in the lawsuit filed today.

“Gov. [Tom] Wolf has no discretion to refuse to issue an executive order or proclamation ending the COVID-19 state of disaster emergency.”