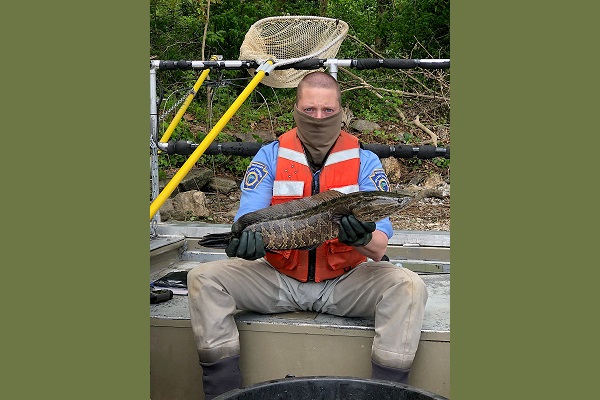 Harrisburg, PA (May 22) — The Pennsylvania Fish and Boat Commission (PFBC) is urging anglers to report and dispose of any invasive Northern Snakehead fish that may be caught in the lower Susquehanna River.

In late March, operators of the fish passage systems used at the Conowingo, Holtwood, and Safe Harbor dams to assist migrating American Shad during their spring spawning runs indicated that due to restrictions associated with COVID-19, fish passage operations had been delayed from the original start date of April 1.

Fish passage operations commenced on the afternoon of May 12 at Conowingo Dam’s east fish lift. Historically by this date, nearly 70% of the annual American Shad spawning migration would have already passed Conowingo Dam during a typical spring. Over the course of four days, lift operators observed 35 Northern Snakeheads within the east fish lift; 14 of the invasive fish were able to be netted and removed, while another 21 entered the Conowingo Pool. During this same time, only 485 American Shad were counted at the east fish lift. Due to the concern over increased invasive species passage and the lateness of the season for successful American Shad passage, the Susquehanna River Anadromous Fish Restoration Cooperative (SRAFRC) recommended that fish passage operations be immediately ceased to prevent further passage of snakeheads. Fish passage operations at the Holtwood and Safe Harbor dams upriver were also ceased immediately, although no snakeheads were observed at either location. During two days of operations, 21 American Shad passed the Holtwood Dam, while one shad was observed passing the Safe Harbor Dam fish lift. 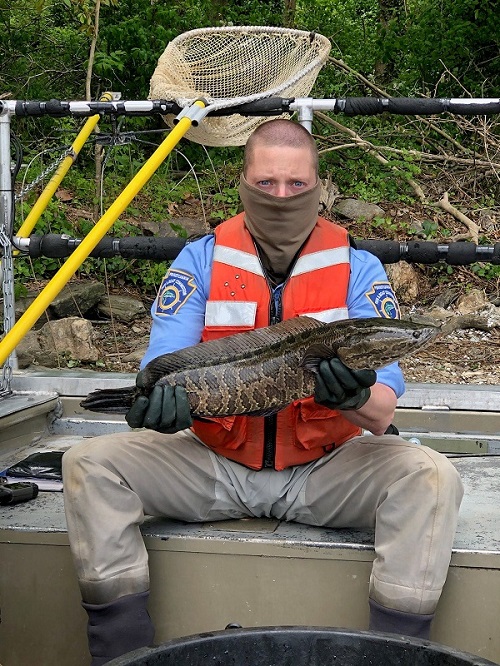 (Pictured: PFBC Non-Game Fisheries Biologist Doug Fischer holds a Northern Snakehead collected from the Conowingo Pool in the Lower Susquehanna River on May 21, 2020)

“Further introduction of an invasive species such as the Northern Snakehead to the Susquehanna River watershed in Pennsylvania is something we take very seriously,” said Joshua Tryninewski, Fisheries Biologist with the PFBC’s Anadromous Fish Restoration Unit. “Unfortunately, a late start to fish passage operations followed by an increasing occurrence of the unwanted fish presented unfavorable conditions for successful shad passage and have posed a serious threat to the Commonwealth’s aquatic resources.”

Northern Snakeheads, native to parts of China, Russia, and Korea, first drew attention in the mid-Atlantic region in 2002 when a pair were discovered in a Maryland pond. Snakeheads were first confirmed in Pennsylvania in July 2004 in Meadow Lake, Philadelphia County, and are present in the connecting lower Schuylkill and Delaware rivers. In summer 2018, anglers began catching snakeheads in Octoraro Creek in Lancaster County, a tributary that enters the Susquehanna River below the Conowingo Dam; however, snakeheads are not known to occur in the upper Octoraro Creek basin above the dam at Pine Grove. In September 2019, an angler reported catching of a single snakehead in the Monongahela River near Braddock, PA, and the specimen was verified by PFBC biologists.

In response to the known presence of Northern Snakeheads in the Conowingo Pool, the PFBC began conducting surveillance operations utilizing boat electrofishing to locate and remove snakeheads. On May 21, while targeting likely habitat areas for the species, the PFBC successfully located and removed one snakehead from the river. In addition, a private environmental consulting firm which had been conducting an unrelated survey on the same section of the river also collected one snakehead and provided the specimen to the PFBC.

“Moving forward, biologists will combine other ongoing survey work targeting other species within the lower Susquehanna River to serve the dual purpose of searching for and removing snakeheads in the Conowingo Pond and its tributaries,” said Kris Kuhn, Director of the PFBC Bureau of Fisheries. “Anglers also play a critical role in controlling the spread of the invasive species and we’re counting on their cooperation.”

Anglers are reminded that possession, transport, and importation of a live snakehead is unlawful in both Pennsylvania and Maryland. Any of these invasive fish that are caught should be killed and disposed of properly or consumed. Anglers who suspect they have caught a snakehead are encouraged to NOT release it, and report it to the PFBC at (610) 847-2442 or by sending an email to [email protected].

For more information on Northern Snakeheads in Pennsylvania, including an identification guide, visit the PFBC snakehead resource page on our website.