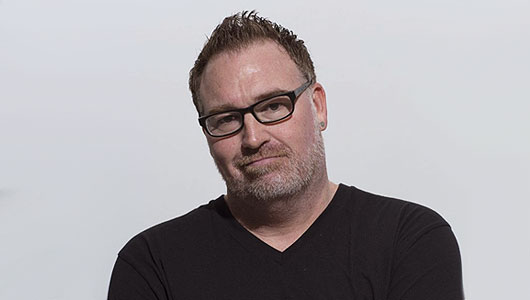 Chad Benson doesn’t look or sound like a typical talk radio host. And that’s a GREAT thing. Conversational, informative, irreverent and very FUNNY. Chad’s take on the issues offers a refreshing sound that gives talk listeners the hard news and opinion that they need in a thoughtful, entertaining way that they CRAVE.

At 44, Chad is part of a New Generation of talk hosts that is able to connect with talk’s existing demo while bringing new and younger listeners into the format. Chad is an accomplished talk show host boasting over 22 years experience in the entertainment industry. He started in music radio in the 1990s at the legendary KRTH in Los Angeles as the Executive Producer of the Robert W. Morgan Show and has also been featured on Los Angeles radio stations such as KZLA-FM and KNCI-FM and KWOD-FM in Sacramento. Chad has also honed his skills as a voice artist for several Hollywood productions and has been the voice of several cartoon characters.

Chad’s sense of showmanship and entertainment, developed from years in music radio, has had a huge influence on him as a talk host, which is where his true passion lies. Using this creativity from the music side of the business, Chad honed his talk skills at Talk Radio UK as one of the first commercial talk hosts to take on the mighty BBC, boasting over a quarter million listeners per week. With success and experience abroad, Chad returned to the U.S. and hosted programs in Palm Springs at K-NEWS-FM and in San Antonio at KTSA-AM. “Chad Benson is not the usual talk host. His entertaining style, and passion for talk radio, helped develop him into a great talent.  He’s not afraid to go places the average talk host will not tread.  Very unique!”, says Greg Martin, Operations Manager / Program Director, Alpha Media San Antonio.

In his early years, fresh out of school, Chad left everything he knew at home in Southern California to play professional soccer in Europe and was talented enough to be signed onto the rosters of several teams including the Bristol Rovers, the Fallkirk Scotland and the Portsmouth Football Club.

Chad has a son named Jack, who has changed his world.