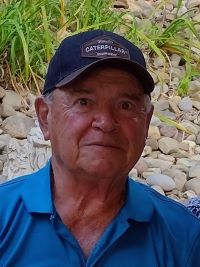 1947-2022
Wade M. Dixon, age 75 of Sabula, PA died at his home.
Born on July 28, 1947 in DuBois, PA, he was the son of the late Clifford and Jennie (Smith) Dixon.
Wade was a veteran of the United States Army having served during the Vietnam War.
On July 27, 2002 he married Mary Ann (Hockman) Dixon. She preceded him in death on June 23, 2013.
Wade retired from the Pennsylvania Department of Conservation and Natural Resources Bureau of Forestry after over 30 years of service. He owned and operated Dixon Century Farms for over 50 years.
He was a member of the George D. Montgomery American Legion Post 17, the James T. Patterson Post 813 Veterans of Foreign Wars, the Pulaski Club and the Hickory Grange. Wade was a volunteer for the American Red Cross during the 2005 Hurricane Katrina Recovery efforts. He also enjoyed auto racing and restoring antique tractors.
Wade is survived by one daughter (Erin Heath of DuBois, PA), one son (Clifford Worth Dixon of Farmingdale, NY), one stepdaughter (Lu Ann Kunes and her husband Todd of DuBois, PA), one stepson (Dennis Llewellyn, Jr . of De Lancey, PA) and four grandchildren (Morgan Heath and Brianna, Jack and Nicholas Kunes), one brother (Calvin Dixon) and numerous nieces and nephews.
Visitation will be held on Tuesday, November 1, 2022 from 2 -4 PM and 6- 8 PM at the Baronick Funeral Home & Crematorium, Inc.
A funeral service will be held on Wednesday, November 2, 2022 at 11 a.m. from the funeral home with Pastor Bill Edwards officiating.
Burial will take place in Morningside Cemetery where full military honor will be accorded by the members of the DuBois Area Honor Guard.
Memorial donations may be made to DuBois Area Honor Guard, P.O. 907 DuBois, PA 15801 and or the Keystone Elk County Alliance, 134 Homestead Drive, Benezette, PA 15821.