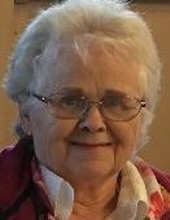 Born February 23, 1936, in Winslow Township, she was the daughter of the late Fred A. and Reba (Sprankle) Armagost.

On June 11, 1955, she married Thomas A. Kirkwood at Bollinger Church in Reynoldsville. He survives.

Shirley graduated from Reynoldsville High School in 1953. In her working years, she worked for Cameron Wholesale, Allegheny Craft, and D.E. Jones. Shirley enjoyed crocheting, quilting, completing puzzles, doing crafts, and spending time with family and friends. As a member of Temple Baptist Church, she was active in many church activities.

Shirley was preceded in death by her parents and five siblings, Fred A., Everett, and Zelma Armagost, Lela Uplinger, and Lola Smith.

Friends and family will be received from 10 a.m. until noon on Friday, November 18, 2022 at the Adamson Funeral Chapel and Crematorium. Following the visitation, a funeral service will be held at 12:00 p.m. with Rev. Kevin Orndorff officiating. Interment will be in Reynoldsville Cemetery.