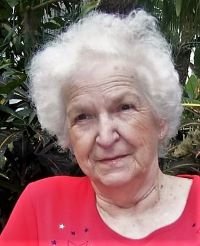 Maxine M. (Kerstetter) Barber passed away peacefully at the DuBois Nursing Home on July 15, 2022. She was 96 years old.

Maxine was born at the old Maple Avenue Hospital in DuBois, Pennsylvania on July 6, 1926 to Charles Franklin Kerstetter and Mary Rachel Halderman Kerstetter. Her parents brought her and her twin sister home to her two older brothers who immediately took on assisting with the twins’ upbringing. For example, her brother John would give her money for the movies and her brother Donald would provide her sister, Josephine with the cash to go!

Maxine attended DuBois Senior High School until her senior year, when at the age of 17 she decided to leave her schooling to help with the war effort. She became a welder, working on ships on Neville Island. She worked for a corporation that specialized in shipbuilding; they were contracted to build 300 ships for World War ll. Maxine met and later married Lloyd Paul Barber on May 3, 1944. To this union three children were born, Patricia, Lloyd, and Linda.

Maxine worked all of her married life; she retired in July of 1988 from Brockway Glass after many years of service of working shift work at plant one.

Friends and family who knew her, knew she was hard working and a very independent person. She enjoyed shopping for clothes, going to Curves exercise group, going out to eat (loved coconut shrimp), and she loved her dogs, “Peanuts” (which became her nickname) and then “Tinker”. But, above all, she loved to gamble! If she went with the girls or her family, everyone came back empty handed; she, on the other hand, always had a bucket of money from her outing! Maxine was full of life and always had her coat on and her purse waiting by the door; ready for the next adventure!

Maxine is survived by her daughters: Patti Matney (Jim) of Gretna NE, Linda Anderson (Tom) of DuBois, PA, and son Sonny Barber (Sue) of Johnstown, CO. She has nine grandchildren, 19 great grandchildren and five great-great grandchildren. She is preceded in death by her husband, grandson and granddaughter.

There will be no public visitation.

A memorial service will be held on Friday, August 5, 2022 at 12 p.m. from the Baronick Funeral Home & Crematorium Inc. with Pastor Terry Felt officiating.

Burial will be in Morningside Cemetery.