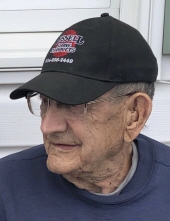 Born August 8, 1928, in Curwensville he was the son of Arthur and Esther (Norris) Neeper. He worked initially for Harbison Walker in the mining division. After attending Penn State courses, he spent several decades as a federal safety inspector.

He was a member of the Masonic Lodge #314. He was an avid fan of Golden Tide sports, especially, wrestling and football. He was a member of the Clearfield Beagle Club and a competitor in Field Trial beagling where he raised numerous AKC champions. Additionally, he was an NRA competitive shooter where he held numerous Master Class classifications. He was avid hunter and spent a great deal of time planting and caring for trees on “his beloved mountain”.

On June 20, 1948, in Sinnemahoning he wed Betty I. (Liddle) Neeper who preceded him in death on September 20, 2020. He was also preceded in death by parents, brother James Neeper, sisters Evelyn Smith, Rose Coy, and Ann Pierson.

He is survived by 3 children Murray Neeper and wife Pacifica of Saint Marys, Carolyn Keely and her husband Michael and Cynthia Russell and her husband Daniel all of Curwensville.

Private Funeral Services will be held at the convenience of the family. Interment will follow in the Oak Hill Cemetery.