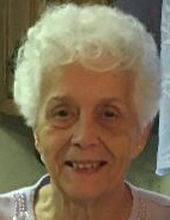 Born April 20, 1936, in DuBois, she was the daughter of the late Harry and Frances (Guiher) Wilson.

On October 8, 1955, she married John E. “Jack” Pringle at Mt. Zion Church. They were married for 65 glorious, wonderful years. He preceded her in death on May 20, 2021. After his passing, Bootie made her home in Leechburg with her daughter.

In 1954, Bootie graduated from Sandy High School where she was the captain of the cheerleading squad. She was a homemaker and enjoyed knitting, baking, and spending time with her family, especially her grandchildren. Bootie was an avid Pirates fan. She was a member of the Trinity United Methodist Church.

In addition to her parents and husband, Bootie was preceded in death by two brothers, Harry (Jean) and Robert (Mona) Wilson, and a sister, Mona (Charles) Hart.

Friends and family will be received Friday, November 4, 2022 from 2-5 p.m. at the Adamson Funeral Chapel and Crematorium. Following the visitation, a funeral service will be held at 5 p.m. from the funeral chapel with Colleen Deibler officiating. Interment will be in Morningside Cemetery.