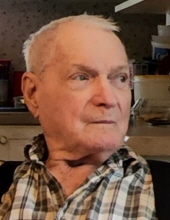 Clair Oscar Neeper 90, of Colonial Courtyard Clearfield and formerly of Curwensville, went to be with the Lord Sunday January 8, 2023.

Born August 6, 1932 in Curwensville he was the son of Dorsey and Rhoda (Peters) Neeper. He served in the U.S. Army during the Korean Conflict and was stationed in Fort Knox and Germany.

Surrounding his time serving in the military, he was a man of many trades working in various construction businesses, as a police officer with the Curwensville Police Department, a Forest Fire Warden for over 40 years and eventually retiring from the Curwensville School District after 28 years of service where he served as Superintendent of Grounds during that time. In his retirement he continued to serve the school district working as a bus driver and a security officer at many school functions and sporting events.

A public Memorial Service will be held on Friday February 3, 2023 at 12PM at the Curwensville Alliance Church with Pastor Steven D. Shields officiating.

Friends will be received at the Church from 11:00 AM till the time of services at Noon.

The family suggests memorial contributions be made to the Curwensville Alliance Church, 725 Susquehanna Avenue, Curwensville, PA 16833