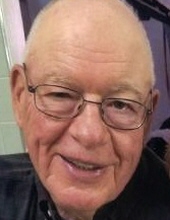 Chuck was born at home in Luthersburg, PA on April 13, 1940 to Leland Orlando and Ruth Naomi (Campbell) Smith.

He graduated from Brady Township High School in 1958 before joining the Army Reserves from 1959-1965. On October 15, 1960, Chuck married the love of his life, Darlene Haag. In 1960, he worked for Edward’s Lakes-To-Sea Bus Station in DuBois as a ticket agent, as well as for Nelson’s Nursery. Chuck started working for Crown Airways as a ticket agent and as the Customer Service Manager in 1970. In 1995, he went to work for Symmco in Sykesville as a sizer on the powdered metal press, and in 2002, he began working for Fleming Landscaping as a landscaper and snow plower.

Many people have commented over the years on how well kept Chuck’s yard, landscaping and gardens were. He took great pride in keeping his flower and vegetable gardens and greenery looking beautiful.

Chuck was a member of Lakeside United Methodist Church in DuBois where he served as a Trustee. He will always be remembered for lending a helping hand to friends, neighbors, or anyone who needed it.

In lieu of flowers, memorial contributions may be made to the Luthersburg-Union Cemetery or the Gateway Humane Society, P.O. Box 678, Falls Creek, PA 15840.