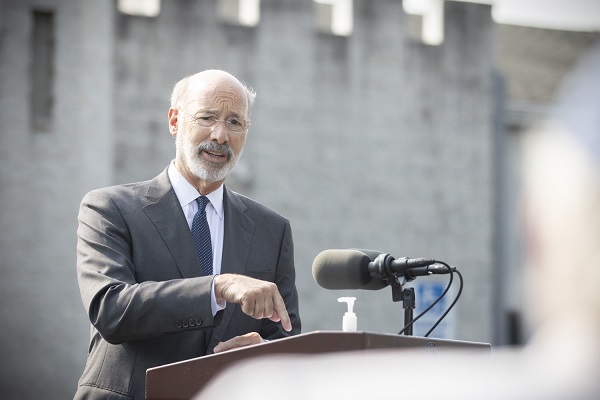 Governor Tom Wolf answering questions from the press. Governor Tom Wolf today presented his fall legislative agenda for worker and family support and protections, COVID-19 recovery, and government reform. The initiatives were introduced to focus the General Assembly after a spring and summer of Republican efforts to curtail the administration’s efforts to manage the pandemic and keep the public safe. Harrisburg, PA – August 25, 2020

Harrisburg, PA (AP) – Pennsylvania’s governor is urging lawmakers to legalize recreational marijuana and spend down much of the remaining $1.3 billion in federal coronavirus relief funds.

Democratic Gov. Tom Wolf on Tuesday outlined his priorities for the fall legislative session. His proposal on the federal funding includes extra hazard pay for workers on the front lines of handling the pandemic, as well as financial support for small businesses, child care needs, protective equipment and utility shut-offs.

House Republican Leader Kerry Benninghoff is dismissive of the governor’s proposals, calling them unaffordable and a taxpayer bail out of mandates.

The initiatives were introduced to focus the General Assembly after a spring and summer of Republican efforts to curtail the administration’s efforts to manage the pandemic and keep the public safe.

“House and Senate Democrats have been fighting for progress to protect families and businesses in these spaces since the beginning of the pandemic, but they have been stopped at every turn by the Republican majority focused on ignoring the public health crisis,” Gov. Wolf said. “That must stop now. The legislature must come back and take immediate steps to provide funding to frontline workers and businesses, put in place protections for families and our workforce, and make these commonsense reforms that can provide confidence in our government. Pennsylvanians need relief, they need reform, and they need it now.”

Gov. Wolf called on the legislature to take immediate action on a series of proposals including:

Relief and Protection for Workers and Families
Families and workers throughout Pennsylvania are still struggling from the effects of COVID-19. The legislature must act to help provide hazard pay for frontline workers, more child care options, and safe workplaces for all Pennsylvanians.

Hazard Pay for Frontline Workers
$225 million to increase hazard pay to Pennsylvania workers, using the overall structure of the current PA Hazard Pay Grant Program administered through the Department of Community and Economic Development. This funding would cover a $3.00/hour increase for 208,000 frontline workers across the commonwealth.

Providing PPE to Frontline Workers
The governor is proposing $10 million for a PPE Reimbursement Program for employers to cover the cost of masks, face shields, cleaning supplies, hand sanitizers and soaps, and other industry-specific PPE in accordance with the Department of Health, Occupational Safety and Health Administration (OSHA), and the Centers for Disease Control and Prevention (CDC) recommendations.

Workers must have access to safety equipment and cleaning materials, and workspaces must be sanitized regularly to protect workers and customers. This program would provide grants of up to $5,000 in reimbursements for Pennsylvania-based small businesses with fewer than 150 employees, and for counties who make PPE available to election workers.

Expanding Access to Child Care
The governor is proposing a significant investment in child care, including $250 million for families with school-aged children in need of child care because of blended or remote in-person instruction models. The governor is also proposing $27 million to expand child care options in “deserts,” where few providers currently exist.

Paid Parental Leave for All Pennsylvanians
The governor announced the commonwealth’s new paid parental leave proposal, which will offer six weeks of paid leave to commonwealth employees who have been employed for a year or more. This leave will be separate and apart from any accrued sick or paid time off that the employee may have earned. The governor also called on the legislature to pass paid family and sick leave.

Helping Schools Deliver the Promise of Education
The governor is proposing $3 million for institutions of higher education to partner with local education agencies (LEA) to support educators during the 2020-21 school year. The goal of these partnerships is to provide targeted professional development and reduce learning gaps.

Providing Housing and Utility Assistance
The Pennsylvania Utility Commission (PUC) recently reported that at least 800,000 utility customers across the state are currently in active termination status and would be at risk of having their electricity, water, or gas shut off had the PUC not implemented a termination moratorium at the start of COVID.

The governor is proposing $100 million in grants to be divided between the Low-Income Home Energy Assistance Program (LIHEAP) and a new emergency water/wastewater program administered by PENNVEST to assist residential customers who would be subject to termination of service when the current PUC moratorium on terminations is eventually lifted.

The governor is proposing $100 million to be used to expand the PA Housing Finance Agency CARES Rent Relief Program to provide additional financial assistance on behalf of low- to moderate-income renters experiencing difficulty making rent payments as a result of the pandemic. Assistance will continue to be made available in the form of a grant and funds will be paid directly to landlords or property owners.

The governor is also calling on the legislature to increase the current $750 per month cap on assistance to renters, which has limited participation in the program, by instead linking assistance to the federal HUD index.

Providing Recovery for Small Businesses
By providing hundreds of millions of dollars of additional grants and loans for Pennsylvania businesses, the legislature can take immediate action to help Pennsylvania’s economic recovery. The legislature should also provide relief for bars and restaurants by canceling the alcohol tax and allowing businesses to buy at cost. Over time, this funding can be supplemented by legalizing recreational marijuana and dedicating a portion of the funding to historically disadvantaged businesses.

Alcohol Tax Cancelation or Reduction
The governor is calling on the General Assembly to pass legislation to revitalize Pennsylvania’s hospitality, leisure, and service industry by offering alcohol-tax cancelation or reduction for six months, and allowing the hospitality industry to purchase alcohol at or near cost for six months.

Recreational Marijuana Legalization to Fund Ongoing Business Grants and Restorative Justice
The governor is calling on the legislature to legalize recreational marijuana with the proceeds going to existing small business grant funding. Fifty percent of the funding would be earmarked for historically disadvantaged businesses. Along with the call to the General Assembly to pass legislation legalizing the sale and use of recreational marijuana, the governor proposes that a portion of the revenue be used to further restorative justice programs that give priority to repairing the harm done to crime victims and communities as a result of marijuana criminalization.

Reforming Government, Protecting Elections
The COVID-19 pandemic exposed the heightened need for government reform. Gov. Wolf knows we need immediate reforms to our election and voting systems so that people can vote safely, and broader government reforms so Pennsylvanians know that their state elected officials are working on behalf of them and not special interests.

Banning Gifts for Public Officials
Gov. Wolf banned members of his administration from accepting gifts and believes that all public officials should be held to the same standard. Pennsylvania is one of 10 states with no specific law limiting gifts to public officials. Outside the executive branch, politicians in Harrisburg can take unlimited gifts from special interests. The governor wants the gift ban he put in place to be made permanent and expanded so all state elected officials are accountable to it.

Curbing Special Interest Influence
Pennsylvanians need to have confidence that decisions made by their government are made on behalf of constituents, not rewards for the special interests with the deepest pockets.

Campaign Finance Reform – Enacting new campaign finance laws that would place limits on contributions to candidates seeking elected office, implement aggregate limits for races, place sensible restrictions on Political Action Committees (PACs), and strengthen reporting and disclosure requirements across the board to restore confidence in government, and curtail the role of campaign spending in our political process.

Outside Income Transparency – Requiring public officials to disclose sources, type of work, and amount of outside income received.

Ensuring Safe and Secure Elections
The governor is asking the General Assembly for legislation to allow ballots to be counted as long as they are postmarked on election day and received by the Friday after the election.

Also, he is calling on the legislature to allow the pre-canvassing of ballots 21 days before the election, while providing counties flexibility to fill vacant poll worker positions earlier than the five days prior to an election currently allowed.

The funds for these initiatives would come from the $1 billion in CARES Act funding that has been placed in reserves, as well as the revenue generated from the legalization of recreational marijuana, which will take an act of the General Assembly to become law.

“If we want our economy to become strong again, the legislature needs to take action now,” Gov. Wolf said.