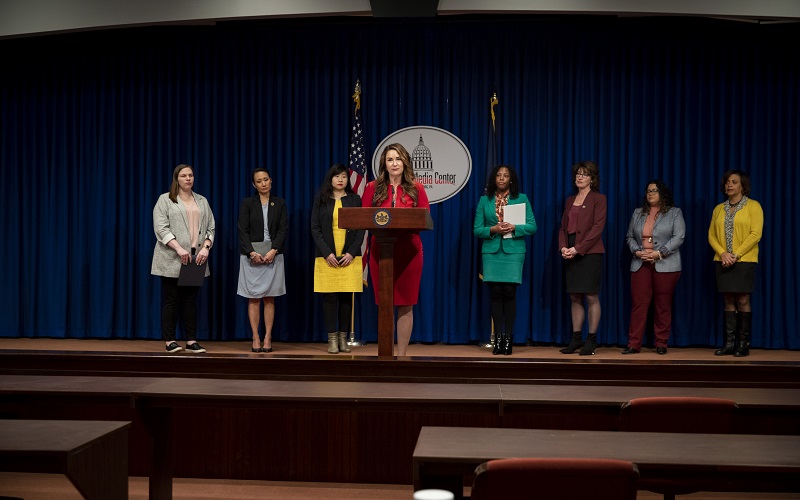 Harrisburg, PA – Tuesday was Equal Pay Day, a day which marks how far into the year women must work in order to be paid what men were paid in the previous calendar year. On average, women who work fulltime are paid just 83 cents per every dollar men are paid and nearly two-thirds of people making the minimum wage are women.

Researchers say the wage gap exists for a variety of reasons, including differences in pay are caused by occupational segregation (with more men in higher paid industries and women in lower paid industries), vertical segregation (fewer women in senior, and hence better paying positions), ineffective equal pay legislation, women’s overall paid working hours, barriers to entry into the workforce, and women being more likely to step away from jobs to care for family members.

Equal Pay Day marks how far into the year women must work in order to be paid what men were paid in the previous calendar year. On average, women who work fulltime are paid just 83 cents per every dollar men are paid and nearly two-thirds of people making the minimum wage are women.

“Women add tremendous strength to our workforce from entry level positions to CEO roles, and it is absurd that we continue to hinder their earning potential,” said First Lady Francis Wolf. “The Wolf Administration has taken steps to close the gender pay gap for state employees, and it’s time for Pennsylvania as a whole to catch up. We are hurting our women and our economy by abiding by these antiquated processes, and something needs to change.”

Governor Tom Wolf has called for a minimum wage increase every year that he has been in office, and once again, he is calling for the General Assembly to raise the wage for working Pennsylvanians.

Gov. Wolf is calling for an immediate increase to $12 an hour on July 1, 2022, with annual increases until the wage reaches $15 an hour. Further increases would be tied to inflation to ensure that working Pennsylvanians never go without a cost of living increase for 13 years again.

A $15 minimum wage would impact an estimated 1.5 million workers, or 25 percent of all Pennsylvania workers, either directly or indirectly. Of the nearly 1 million workers who would directly benefit from an increase to $15, 62.2% are women. This means a raise for 618,400 women, or 20.9% of all women working in the commonwealth.

Increasing the minimum wage to $15 an hour in Pennsylvania would also directly benefit:

The gender wage gap is not only an example of deep inequity in our society, it holds Pennsylvania back. According to the Pennsylvania Coalition Against Domestic Violence, the lack of pay equity costs women more than $915 billion every year. If the gender wage gap were closed, a working woman would gain, on average across her lifetime, enough additional pay to cover:

“To learn that Black women earn significantly less than their male, white counterparts is disappointing, but to see the amount of money Black women make compared to white men decrease rather than increase confirms the need for change,” said LaDeshia Maxwell, Executive Director of the Governor’s Advisory Commission on African American Affairs. “A majority of Black women in the commonwealth are the breadwinners in their households providing for their children and communities, and they should be compensated fairly for the jobs they do. I know today isn’t Black Women’s Equal Pay Day but we stand in solidarity with all women in hopes that a change for some leads to a change for all.”

“The Asian Pacific American community is a collection of more than 50 diverse ethnic groups which speak more than 100 languages and dialects,” said Stephanie Sun, Executive Director of the Governor’s Advisory Commission on Asian Pacific American Affairs. “It does a disservice to the community to lump all of these people together and say they are all the same when they are really very different. For example, wage equity for all ethnic groups in the category Asian Pacific American are especially very different.  Burmese, Nepali, Tongan, Samoan, Hmong and Cambodian women are paid on average between 50 and 60 cents for every dollar paid to white men. If we are to have an equitable and fair society, the same work must receive the same pay regardless of gender or ethnic background.”

“The ongoing pay disparities with Latinas has gone on far too long. This year’s statistics reflect that Latinas are paid just $0.49 for every dollar paid to White men. This means, that the Latina pay gap has gotten significantly worse since the start of the global pandemic. Based on these studies, it’s important that we advocate for equal pay legislation and raising the minimum wage to help elevate working families across Pennsylvania. Overall, these systematic issues with women in the workforce can no longer be ignored,” said Luz Colon, Executive Director of the Governor’s Advisory Commission on Latino Affairs.

“Women in Pennsylvania face a devastating wage gap from their male counterparts which is even more acutely seen by women of color, who are paid not only less than men but less than white women,” said state Senator Tina Tartaglione. “The systemic discrimination that allows for the underpaying of women must be addressed and remedied. When more than 2/3rds of all workers earning Pennsylvania’s embarrassingly low minimum wage are women, it is evident that more must be done to ensure all workers are paid appropriately for their work by both raising our minimum wage as well as addressing the deeper causes of pay disparity.”

“The majority of minimum wage earners are not teenagers but women. So as we commemorate Equal Pay Day on March 15, the symbolic date to show how far into the year the average woman must work in order to match what the average man earned in the prior year, we need to acknowledge PA’s minimum wage contributes to this gender disparity we are trying to eliminate – not only to benefit workers but also for the benefit of our families and our communities,” state Representative Patty Kim said.

Women in Pennsylvania work hard and deserve fair pay for their work. The commonwealth can better support working women – and help them better support their families – by passing equal pay legislation and raising the minimum wage.

Clearfield County elected officials may be receiving a salary increase