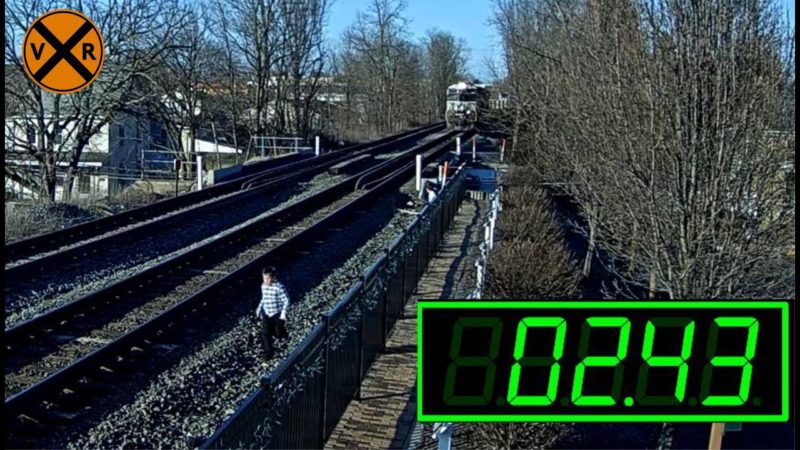 Greencastle, PA – A viral video of a Pennsylvania family nearly getting struck by an oncoming train during a photo shoot is serving as a harsh reminder of why you should stay off the tracks.

The video, captured by Virtual Railfan Inc, shows the photographer, parents, and five kids scrambling to safety as they hear the train approaching.

Photographers, including those in our area, have posted the video to social media saying that situations like this one are exactly the reason why most responsible photographers will not agree to photo sessions on a railroad track.

Safety tips:
The only safe place to cross is at a designated public crossing with either a crossbuck, flashing red lights or a gate. If you cross at any other place, you are trespassing and can be ticketed or fined. Cross tracks ONLY at designated pedestrian or roadway crossings.

Railroad tracks, trestles, yards and equipment are private property and trespassers are subject to arrest and fine. If you are in a rail yard uninvited by a railroad official you are trespassing and subject to criminal prosecution; you could be injured or killed in a busy rail yard.

It can take a mile or more to stop a train, so a locomotive engineer who suddenly sees someone on the tracks will likely be unable to stop in time. Railroad property is private property. For your safety, it is illegal to be there unless you are at a designated public crossing.

Trains overhang the tracks by at least three feet in both directions; loose straps hanging from rail cars may extend even further. If you are in the right-of-way next to the tracks, you can be hit by the train.

Do not cross the tracks immediately after a train passes. A second train might be blocked by the first. Trains can come from either direction. Wait until you can see clearly around the first train in both directions.

Flashing red lights indicate a train is approaching from either direction. You can be fined for failure to obey these signals. Never walk around or behind lowered gates at a crossing, and DO NOT cross the tracks until the lights have stopped flashing and it’s safe to do so.

Do not hunt, fish or bungee jump from railroad trestles. There is only enough clearance on the tracks for a train to pass. Trestles are not meant to be sidewalks or pedestrian bridges! Never walk, run, cycle or operate all terrain vehicles (ATVs) on railroad tracks, rights-of-way or through tunnels.

Do not attempt to hop aboard railroad equipment at any time. A slip of the foot can cost you a limb or your life.

Be aware trains do not follow set schedules. Any Time is Train Time!