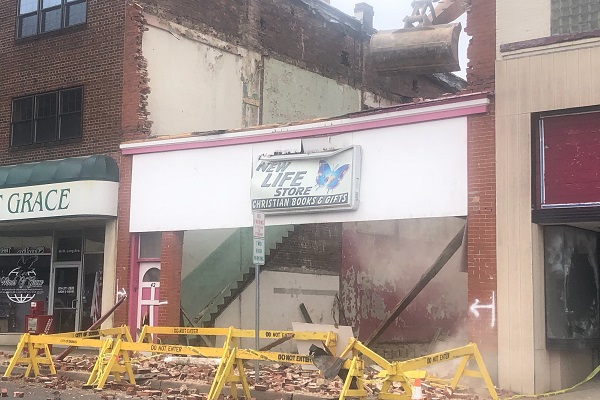 DuBois, PA – A historic building in Downtown DuBois had to be knocked down yesterday after it became extremely structurally unsound after years of remaining empty.

The building, which was the former New Life store at 42 West Long Avenue, was demolished Thursday morning after the street was closed off to traffic.

Although city officials say it’s a shame that such a historic building had to be torn down, it was for safety reasons. They knew that the building would not be able to be saved once they saw the extent of the damage. In addition to many problems inside the abandoned building, the sidewalk in front of the building is now crumbling, revealing a large hole to the basement. It has essentially caused a sinkhole.

The damage is due to the building remaining empty for more than 10 years, with the former owner reportedly not responding to any issues and repairs that were needed.

City officials say it was the smart choice. By demolishing it themselves, they could control how and where it fell instead of waiting for it to inevitably collapse by itself.

The sidewalk remains blocked off with caution tape. Please do not walk in that area.

As for what will happen next, there are no official plans. Someone could buy the space, although it is a very small lot. The city is also considering using the space to create a small pocket park, though again nothing is confirmed at this time. For now, the goal is to just clean up the space and make it safe again.

Dr. Oz in DuBois for a local meet-and-greet

Railroad crossing repairs in DuBois should be completed today