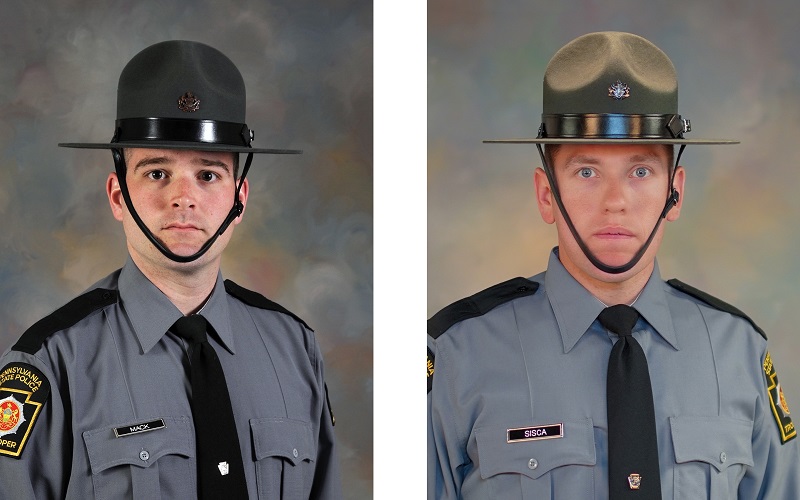 Harrisburg, PA – Pennsylvania State Police (PSP) Commissioner Robert Evanchick confirmed that Trooper Martin F. Mack III, 33, and Trooper Branden T. Sisca, 29, were struck and killed by a driver earlier this morning on I-95 south in the area of milepost 18 in Philadelphia City, Philadelphia County. A male pedestrian was also struck and killed at the same time.

The troopers were dispatched after receiving reports of a man walking on I-95 south. As they were helping him into the back of their cruiser, the female suspect attempted to drive past the scene. She fatally struck all three and the cruiser just before 1:00 a.m. and remained at the scene.

“Our department is heartbroken with the tragedy that occurred early this morning in Philadelphia,” said Colonel Evanchick. “We ask our fellow Pennsylvanians to keep the families of our troopers and the pedestrian in their thoughts. This is an extremely difficult time.”

Governor Tom Wolf ordered the commonwealth flag on all commonwealth facilities, public buildings, and grounds to fly at half-staff to honor Trooper Mack and Trooper Sisca. The commonwealth flag shall be lowered to half-staff until sunset on Friday, March 25, 2022, as well as on the day(s) of their funerals which have not yet been announced. The United States flag is to remain at full-staff through this tribute.

All Pennsylvanians are invited to participate.

“This is a heartbreaking tragedy that occurred while these troopers were protecting and serving,” said Gov. Wolf. “This mournful incident is a stark reminder of the risks—and sacrifices—our law enforcement officers undertake every day to keep us safe. My heart goes out to their families and the communities they lived in and served.”