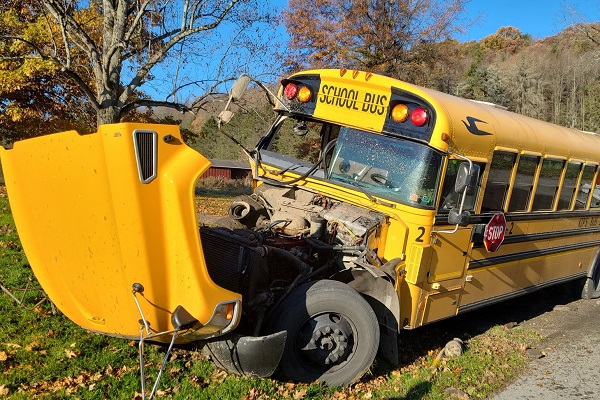 Monday, crews were called out to Village Road in Pike Township.

The driver, 56-year-old Marjann Clark from Glen Richey, had swerved to avoid a deer, went off of the roadway, into a ditch, and struck a culvert.

The bus had heavy damage to the front end. A special rescue used had to be used on the front doors to gain a secondary access point for first responders.

Most of the passengers were transferred to a second bus where EMTs and school administration transported the uninjured to the Curwensville Area School District for further evaluation.

Clark and one passenger, 69-year-old Debra McCully from Curwensville, were taken by EMS to the hospital.

Click Here to read the online police report. (You’ll need to scroll down to page 19 to see this specific report.)

Photo courtesy of the Rescue Hose and Ladder Company of Curwensville.