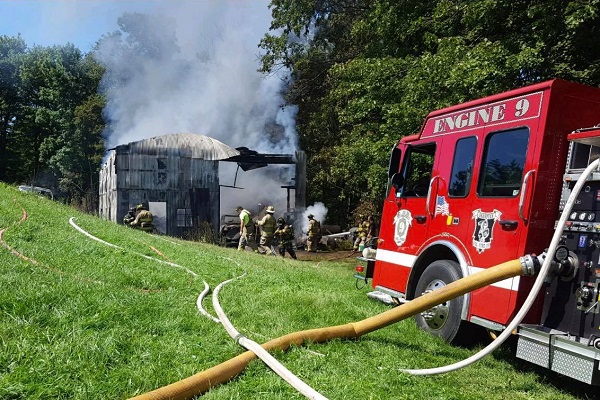 Penn Township, PA – A tractor caught fire inside of a barn in Clearfield County on Thursday.

Multiple fire crews were called to a structure fire along Williams Road in Penn Township, near Grampian, on Thursday just before 2 p.m.

A tractor had caught fire inside a barn. By the time that crews arrive, the barn fire was already fully involved.

Firefighters worked for about two hours to extinguish the flames.

Thankfully, no one was injured.

Details are still limited on how the fire started.

Today at 13:45, Company 8 was dispatched to assist Company 9, Grampian, with a structure fire along Williams Road in Penn Township. Initial reports advised of a tractor on fire, inside of a barn. Engine Tanker 8-2, Engine Tanker 8-1, Rescue 8-1, 851, 853, MedCom 8, and MCU 8 all responded. First arriving units found a well involved barn fire. Upon Company 8’s arrival, Engine Tanker 8-2 set up to supply Engine 9. A dump tank was set up for 8-2 in order to feed water to the scene via tanker shuttle. Engine Tanker 8-1 initially dumped its water and subsequently participated in the tanker shuttle. Rescue 8-1 arrived on scene and provided its cascade services for refilling SCBA cylinders. Crews from ET 8-1 and ET 8-2 went to work assisting with fire suppression and an extensive overhaul operation. Company 8’s EMS provided rehab on scene. Crews operated for approximately 2 hours before returning available.