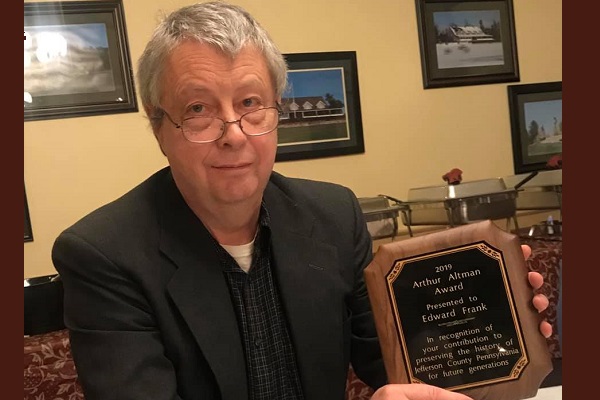 Brookville, PA – A locally made documentary about Douglas Stahlman’s Scripture Rocks in Brookville will have a free screening tonight at 7 p.m. at the Brookville Presbyterian Church Education Building.

The building is wheelchair accessible and located immediately behind the church.

This is the first public viewing of the documentary about Brookville’s Scripture Rocks, a series of strange biblical verses carved into monuments in the woods.

Hidden in the woods surrounding the town of Brookville, Pennsylvania is a story about a man, his triumphs, his hardships, his obsessions, and his deeply felt religious convictions. Many local legends abound about the mysterious carved Bible rocks frequently encountered in the wooded hillsides around Brookville, Pennsylvania. But what is the real story behind the rocks and the man who created them over 100 years ago?

The Scripture Rocks Heritage Park is a free public hiking area maintained and operated by the Jefferson County Historical Society. Here visitors can explore 4.5 acres of a forested hillside on improved trailways that lead to 67 sandstone boulders engraved by Douglas M. Stahlman between 1910 and 1913 as part of his personal religious calling. It is the location of Altar Rock converted into an open air chapel for group worship and later the location of his live-in cabin wherein he penned his journal.

The park also contains a small prehistoric Native American campsite and was the location of some mid-19th century quarrying and exploratory test diggings for possible mine development. Interpretative Panels located throughout the park present many aspects of nature and local history.

We invite you to make plans to hike, explore and learn about a fascinating bit of Jefferson County History.