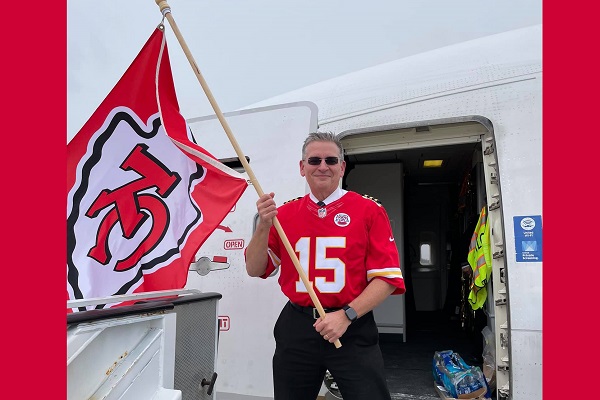 Ridgway, PA – A Super Bowl tie to our area… The pilot who flew the Kansas City Chiefs to the Super Bowl is originally from Ridgway!

Although McClain and his family now live in Cincinatti, his wife is originally from Kansas City, so the McClains are Chiefs fans. He even made sure to dress up for the occasion with a Patrick Mahomes jersey.

He says he made a few adjustments to the jersey to make sure he was still recognizable as a pilot. With the v-neck, his tie could be seen. However, the stripes or epaulettes on the shoulders of the pilot uniform couldn’t be seen, so he bought another set from the company and pinned them on.

McClain says the Chiefs team was incredibly humble and kind during their flights. The flight crew said it was a fun flight with very respectful players. The flight back home was quieter than the flight to get to Tampa Bay, obviously.

McClain recognizes it’s an honor to fly not just this team to the Super Bowl but also to fly millions of people wherever they need to go… whether that’s the the Super Bowl or just on a vacation.

Listen to the full interview with pilot Mike McClain.