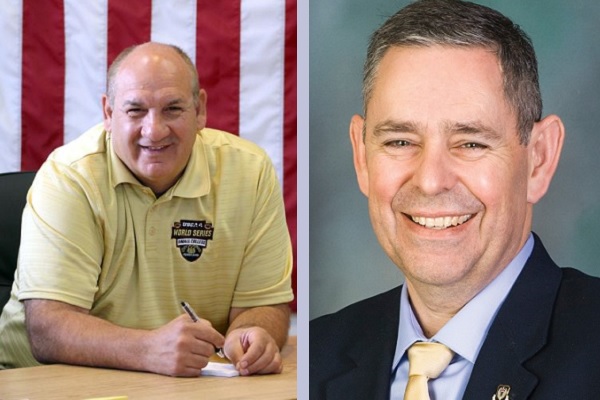 DuBois, PA – As Senator Joe Scarnati recently announced that he will be retiring from the State Senate at the end of this term, two new people have stepped forward to announce their candidacy.

Cris Dush has served three terms as District 66 State Representative and says he will continue to work for the ideals he stands for, but is hoping to make a greater difference as a Senator where he would be one of 50 instead of one of 203.

You can read statements from both Dush and Suplizio to learn more about where they stand on issues.

Also intending to run in the election are St. Marys area Democrat Margie Brown and Brockway area Republican Dr. Jim Brown. We will be reaching out to these candidates as well for interviews so our listeners will be well-informed on who might appear on their ballot.

Harrisburg, PA – State Representative Cris Dush (R-66) announced he is seeking the nod from constituents of Senate District 25 in the wake of Senator Joe Scarnati’s announced retirement from the Pennsylvania Senate at the end of his 5th term in office. The 25th Senatorial District, which includes Cameron, Clinton, Elk, Jefferson, McKean, Potter and Tioga Counties and portions of Clearfield County is the largest in the Commonwealth.

“Today I am announcing that I will be seeking the honor to serve as Senator for the 25th Senatorial District. I had informed Senator Scarnati that while I had a strong desire to ask the people of his district for the honor of that seat I would not run against him. His announcement yesterday clears the way for me to pursue the opportunity to do what I’ve felt called to do.

“It is my hope to continue my fight to restore the legislative sovereignty over the writing of laws rather than the executive and judicial branches doing it by regulation and fiat rulings. I will continue the fight to protect our timber, farming, manufacturing, oil and gas industries. The work I’ve been doing to reduce unfunded mandates on schools, industry, local and county governments will also have a greater weight in a venue where I’m one of 50 rather than one of 203.

“The work I have been doing with House members to uncover wasteful and unaccountable spending will also remain a key component of my work for my constituents and the Commonwealth.

“The people who’ve come along side of me in my family, my community, my House District and the State House have truly blessed me. Those from around the Commonwealth who’ve come along side of me to support the campaign for Auditor General have been amazing. I want to thank all of them for the work they have done. Had the way had been clear from the beginning of this year I would not have had the opportunity to meet so many good people from across the state on such a short notice. I’m hoping they do not feel the work they did was wasted. Their involvement in the process is important and will remain so as long as our republic survives. They deserve much respect and thanks from their neighbors.

We are rural Pennsylvania. We have common sense out here. We are honest, hard working and frugal people who expect the same from the people we hire as public servants and I intend to continue the fight for those values.”

You can learn more about Rep. Cris Dush’s platform at www.repdush.com.

DuBois, PA – Lifelong DuBois resident and former Mayor John “Herm” Suplizio, who currently serves as the city manager, has announced his intention to seek the Republican nomination for state Senator in the 25th Senatorial District. The post is currently held by Senate President Pro Tempore Joe Scarnati, who announced that he is not seeking re-election.

“In my time as city manager of DuBois, I’m proud of what we have been able to accomplish,” Suplizio said. “We have made government more efficient, invested in downtown revitalization, brought tourism dollars to support small businesses and we’ve done all of it without a tax increase. I understand how crucial small businesses are to Central Pennsylvania and our families. As state senator, that’s what I’ll fight for – lower taxes, safe streets, small business and smaller government.”

A 1978 graduate of DuBois Central Catholic, Suplizio has spent his entire adult life around public service. Rising from volunteer firefighter to chief of the DuBois Fire Department and executive director of the local United Way since 1993, Suplizio’s impact on DuBois is far-reaching.As city manager, Suplizio has helped leverage millions of dollars in state grants and private dollars to improve downtown DuBois and incentivize job growth to employers like Danone, a company which just created almost 100 new jobs in Clearfield County.

“We’re doing a lot of great things in DuBois,” Suplizio said. “Stores are opening doors, not closing them. Employers are hiring workers, not laying them off. We’re seeing multimillion-dollar investments into our workforce and a lot of that is due to the fact that DuBois is a great, safe place to raise your family. Just last year, we extended our deal to host the Small College World Series because they recognize the time and investment that our community has put into facilities like Showers Field and our town as a whole. This year, we will also be hosting the 2020 USA Softball Women’s National Team at DuBois’ Heindl Field as part of the “Stand Beside Her” tour presented by Major League Baseball. That’s the experience I want to bring to the Senate – helping to bring more family-sustaining 21st Century jobs and revitalization to communities across the 25th District.”

While excited for the opportunity, Suplizio was quick to acknowledge the fact that the 25th District will be losing a powerful leader in Senate President Pro Tempore Joe Scarnati. “Senator Scarnati has been an outstanding leader and conservative champion in the Senate for two decades,” he said. “I realize that his successor will have tremendous shoes to fill. While I certainly did not anticipate the chance to serve my hometown and the people here that I love, I am committed to advocating for common sense conservative principles in Harrisburg.”

A pro-life, pro-2nd Amendment conservative, Suplizio noted that the freedoms we take for granted are under attack from liberal Democrats and socialist candidates. “Rural Pennsylvania is under attack from the far left,” he said. “From liberals who look at the 2nd Amendment and right to life as a joke to socialists who want to put a tax on everything in sight, we need a proven leader who isn’t afraid of a fight in Harrisburg. I pledge to you from day one that I will never waver from my conservative principles or our district’s values.”

Suplizio attends St. Catherine’s Catholic Church in DuBois and is a supporter of the Catholic Charities. He also serves as executive director for United Way of DuBois. In addition to the number of local organizations he supports, Suplizio has served as a co-chairman of DuBois Community Days, which brings an influx of tourism and business to the region. Suplizio is a father of two grown children, Meghan and Timothy.

You can learn more about Herm Suplizio’s platform at www.hermforpasenate.net.

St. Marys, PA – Margie Brown from St. Marys has announced her candidacy for the Pennsylvania State Senate in the 25th District and is seeking the Democratic nomination.

“Our small towns in rural Pennsylvania are desperate for representation in the state senate. We cannot afford to settle for a politician who is beholden to corporate PACs and lobbyists when we have an industry-created healthcare crisis, small farms losing their supply chains, and a declining quality of life,” Brown said. “Voters in rural areas worry about things like paying their bills, putting food on the table, and getting their kids off to a good start. I know this as fact from the many I years I have worked with the public.”

Brown is a former public school teacher and former journalist who is currently serving on St. Marys City Council. She is also working as a half-time broadcast communications professor at University of Pittsburgh at Bradford.

You can read more about her platform at friendsofmargiebrown.com.

Brown is a graduate of Asbury College in Kentucky and Clarion University. His doctorate was earned at Oxford Graduate School in Dayton, TN. Currently he is serving in public office as a School Director for Brockway Area Schools. He has served on the Pennsylvania School Board Association as Assistant Regional Director for Region 1 where he worked with legislative issues regarding Pennsylvania Public Schools.

Prior to serving as School Director Brown has worked in education 40 years in Pennsylvania, Ohio, Kentucky, and Malaysia.

Dr. Brown will be running for the 25th Senate District, which includes all of Cameron,Clinton, Elk, Jefferson, McKean, Potter, and Tioga Counties, along with 6 parts of Clearfield County (Brady, Huston, & Sandy Twps, DuBois, Falls Creek, and Troutville).

Brown is running on a platform of smaller government, term limits, and campaign finance reforms. Pennsylvania schools need funded through a more fair methods such as HB/SB 76. It is not fair that homeowners and farmers can lose their homes because they can’t afford their taxes. No tax should have the power to leave someone homeless. Brown strongly defends the right of life for unborn and the right to bear arms as stated in the 2nd amendment.

“Pennsylvania is challenged by several major issues in 2020. Everyone recognizes the economy, jobs, budget and the environment as being topics that should be addressed by the legislature. However, rather than tackle them from the business-as-usual perspective they should be addressed as to the root of their problems. Pennsylvania, like most of the country is groaning under a collapse of moral values that displays itself with people taking advantage of others for selfish gain. If this idea is not considered in lawmaking, then the laws will have no moral basis for standing. Our forefathers began our commonwealth with the foundation of their laws based on a higher than man-made law. We should change our current course and seek that Foundation where we began.”

“The citizens of District 25 deserve better than a career politician, they deserve the opportunity to live the American dream and seek the path that God has given them without government interference ruining their job market, their business environment, and their ability to make a healthy living. It’s time for citizens to humble themselves, turn from the morally corrupt ways that have not succeeded, and take back their state. We need to return to the God who gave us this land and abundantly blessed it,” stated Brown.

Additional information about the Brown campaign can be found on Facebook at “Jim Brown for Pennsylvania Senate District 25”. Dr. Brown is available for town hall or civic meetings in District 25 and may be contacted at drjimmbrown@gmail.com.