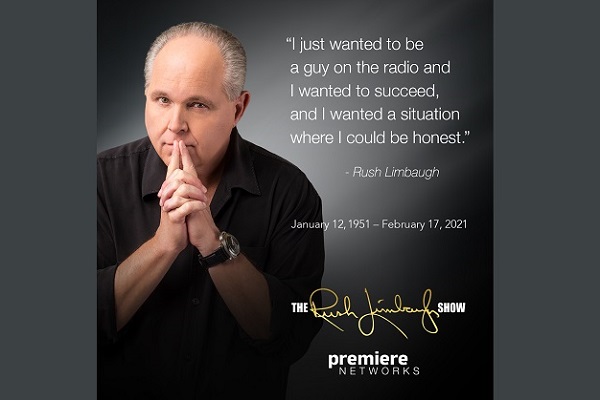 With more than 20 million listeners every week, Rush Limbaugh is the most listened to and highest-rated talk show host in America. Each day Rush not only gives the news, but tells the listeners what to think about it. You may not always agree with him, but it’s hard not to stay tuned.

Rush Hudson Limbaugh III (January 12, 1951 – February 17, 2021) was an American entertainer, radio talk show host, writer, and conservative political commentator. Since he was 16, Limbaugh worked a series of disc jockey jobs. His talk show began in 1984 at Sacramento radio station KFBK, featuring his ongoing format of political commentary and listener calls. In 1988, Limbaugh began broadcasting his show nationally from radio station WABC in New York City. His program, The Rush Limbaugh Show is the highest-rated talk-radio program in the United States. Talkers Magazine in 2012 lists Limbaugh as the most-listened-to talk show host with a weekly audience of 15 million.[3]

In the 1990s, Limbaugh’s books The Way Things Ought to Be (1992) and See, I Told You So (1993) made The New York Times Best Seller list. Limbaugh frequently criticizes, in his books and on his show, what he regards as liberal policies and politicians, as well as what he perceives as a pervasive liberal bias in major U.S. media. Limbaugh was among the highest paid people in U.S. media, signing a contract in 2008 for $400 million through 2016.

He was inducted into the National Radio Hall of Fame and the National Association of Broadcasters Hall of Fame. During the 2020 State of the Union Address, President Donald Trump awarded him the Presidential Medal of Freedom.

Death of inmate at Houtzdale’s State Correctional Institution under investigation