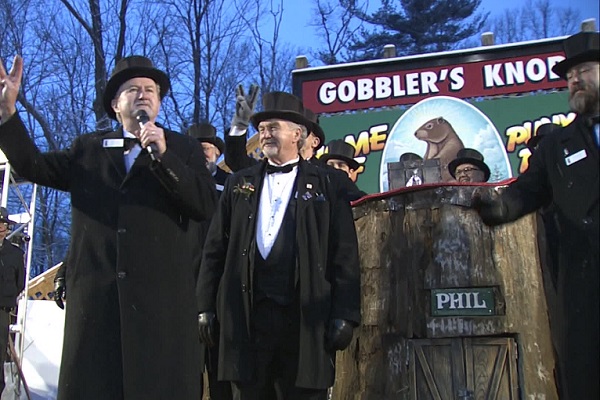 Punxsutawney, PA – History was made in Punxsutawney on Groundhog Day!

In addition to this being what officials believe to be the largest crowd ever in Punxsy history, it was also the first time on record that Punxsy Phil predicted an early spring two years in a row!

It also seems that, despite the large crowd, everything remained fairly calm. State Police in Punxsutawney say they made two DUI arrests on Groundhog Day and gave five traffic citations.

This does not include any other arrests made throughout the weekend, and it only counts incidents handled by State Police, not Punxsutawney Borough.

Punxsutawney, PA – This morning, Pennsylvania’s own world-famous groundhog Punxsutawney Phil once again predicted an early spring after he did not see his shadow, a prediction so rare that it has only happened 20 times in the 134-year history of Groundhog Day and never two years in a row. Residents of Punxsutawney and visitors from across the nation gathered to see Phil make his highly-anticipated weather prognostication, during Pennsylvania’s unique Groundhog Day celebration.

“Groundhog Day is a beloved Pennsylvania tradition that has been embraced wholeheartedly by communities across the country,” said Gov. Tom Wolf. “We are honored Phil has called our commonwealth his home for more than 100 years and look forward to continuing to share his prediction with visitors, residents, and the millions watching from their homes.”

The event now attracts up to 30,000 visitors to Punxsutawney, Jefferson County, located about 80 miles northeast of Pittsburgh. Phil has predicted six more weeks of winter weather 104 times while forecasting an early spring 20 times.

The story of the holiday tradition declares that if the groundhog emerges early on the morning of February 2 and sees his shadow, we will have six more weeks of winter weather. Should he not see his shadow, we will have an early spring. The annual event began in 1886, when a spirited group of groundhog hunters dubbed themselves “The Punxsutawney Groundhog Club” and proclaimed Punxsutawney Phil to be the one and only weather prognosticating groundhog.

“Knowing that the world looks forward to Punxsutawney Phil’s prognostication every year brings joy to our hearts,” said Groundhog Club Inner Circle President Bill Deeley. “At only 22 inches and 20 pounds, Phil might be small, but he is still America’s favorite furry weather forecaster.”

Punxsutawney was originally a Native American campsite. Its location is situated halfway between the Allegheny and Susquehanna rivers, which made it convenient for travel. In fact, the town is located on the earliest known trail to the east, the Shamokin Path. Punxsutawney was officially incorporated as a borough in 1850 and has a current population of nearly 5,500.

Other attractions in Punxsutawney include the Groundhog Visitor’s Center, Weather Discover Center, Mahoning Shadow Trail, Phil’s Borrow at the Punxsutawney Memorial Library, and the Phantastic Phils – a public art project that includes 33 larger-than-life fiberglass groundhogs all creatively painted and designed by local and national artists.

For those who love Groundhog Day and Pennsylvania, Phil-branded shirts are available at shop.visitpa.com along with the complete Pennsylvania Pursue Your Happiness collection.

The Pennsylvania Tourism Office is dedicated to inspiring travel to Pennsylvania. Pennsylvania hosted an estimated 204.4 million travelers in 2019 who directly injected $43.3 billion into Pennsylvania’s economy and supported nearly 500,000 jobs.