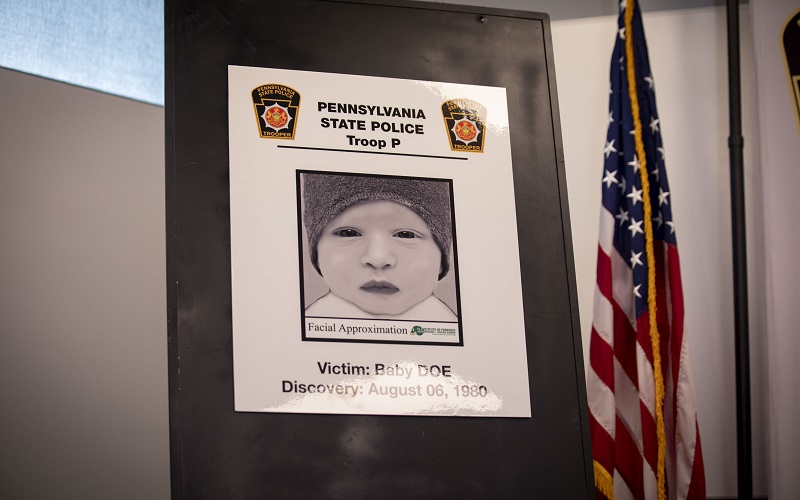 The Pennsylvania State Police discuss a new partnership with Othram Inc. to assist with a 1980 cold case investigation involving the homicide of Baby Boy John Doe in Larksville Borough. The new partnership will utilize advanced DNA testing, a first of its kind in the country for a private laboratory, in Wilkes-Barre, PA on February 16, 2022.

Harrisburg, PA – The Pennsylvania State Police (PSP) announced that it continues to investigate a 1980 cold case involving the homicide of Baby Boy John Doe in Larksville Borough, Luzerne County. In addition to a partnership with the Luzerne County District Attorney’s Office and Othram Inc. to modernize the investigative response, PSP encourages the public to s ubmit tips to Pennsylvania Crime Stoppers.

“With the advancements in technology over the years, the Pennsylvania State Police continues to look for new ways to support older cases,” said Major Jeremy Richard, PSP Acting Deputy Commissioner of Operations. “We are hopeful that technological advancements combined with public support will generate leads and a conclusion for this case.”

The Criminal Investigation Unit at Troop P, Wilkes-Barre began its investigation on Aug. 6, 1980, after an employee of the now defunct West Side Landfill discovered the infant’s body within the mounds of garbage dumped from local waste haulers. An autopsy determined the full-term, white, male infant had died within two hours of birth due to immediate neglect. A second forensic opinion in 2000 held that the infant may have lived for several days. Baby Boy John Doe is listed as Unidentified Person 15765 (UP-15765) in the National Missing and Unidentified Persons System (NAMUS).

The initial investigation failed to identify any leads on the birth mother, and forensic investigative avenues were limited at that time. With the advancements in technology over the years, the remains of Baby Doe were exhumed on Sept. 26, 2016, along with other Luzerne County unidentified homicide victims. The exhumations were part of a collaborative effort between the PSP, Luzerne County district attorney, Luzerne County coroner and University of South Florida Forensic Anthropology Laboratory. Baby Doe was examined by the University of South Florida Anthropology Unit, and samples were secured for DNA and forensic isotope testing.

PSP is working with the Luzerne County district attorney to partner with Othram for advanced DNA testing to develop a genetic profile of Baby Doe, which may identify the infant’s biological parents, siblings or other relatives.

“Our office is greatly looking forward to working with the State Police and Othram in pursuing this more than 40-year-old investigation,” said Luzerne County District Attorney Sam Sanguedolce. “Hopefully, new technology leads us to this infant victim’s identity and answers to this riddle. On a larger scale, we hope this work emphasizes our desire to pursue cases until justice is served. Bringing justice upon perpetrators, and some measure of closure to victims’ families is our primary responsibility and a responsibility we never abandon.”

“Othram Inc. is honored to assist the PSP in Baby Doe’s case,” said Michael Vogen, Othram director of case management. “Our proprietary Forensic-Grade Genome Sequencing has returned names to hundreds of unidentified individuals throughout North America. The National Institute of Justice refers to the tens of thousands of unidentified persons in our country as the ‘silent mass disaster.’ It is a key mission at Othram to build and scale technology that can allow all agencies to work through their backlogs of unidentified remains.”

The public can submit tips on the case through Pennsylvania Crime Stoppers.