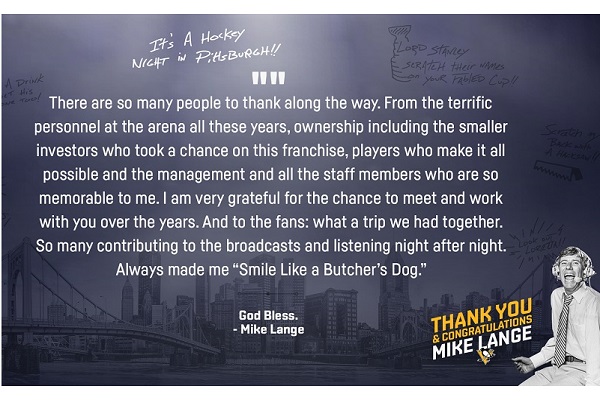 Pittsburgh, PA – Pittsburgh Penguins Hall of Fame broadcaster Mike Lange announced that he will not return to the radio booth for play-by-play duties, but will remain a part of the Penguins Radio Network. Fans will continue to hear Lange’s voice during radio appearances and various Penguins programming.

Lange, 73, missed the majority of the past season out of an abundance of caution during the pandemic while awaiting the COVID-19 vaccine. He returned to the booth alongside color analyst Phil Bourque to call two home games at the end of the regular season and Games 1 and 5 of the Penguins’ Round One series against the New York Islanders.

After a Hall-of-Fame career and 46 years of broadcasting Pittsburgh Penguins hockey, Mike Lange will be retiring from his play-by-play duties.

Ladies and gentlemen, Elvis has just left the building.

“Mike is a broadcasting legend, not just in Pittsburgh, but in all of sports,” said Penguins president and CEO David Morehouse. “He is respected and admired by all, including our ownership, players and management and executive team. Mike’s clever phrases and goal calls are synonymous with the most iconic moments in Penguins history. Although he is stepping away from the booth, he remains a huge part of the Penguins’ family and we look forward to hearing his voice for years to come.”

Lange was honored in a pre-game ceremony celebrating 45 years as the voice of the Penguins in 2019 when the team named the press box at PPG Paints Arena the “Mike Lange Media Level.” His unique and creative style, including trademark phrases such as “Buy Sam A Drink And Get His Dog One, Too,” earned him the Foster Hewitt award for broadcasting from the Hockey Hall of Fame in 2001.

“As many of you know, I have been cutting back on game broadcasts the last few seasons. This year was difficult with the pandemic, but I was still able to broadcast a limited few, which was important to me. That marked 50 years of broadcasting professional hockey – four in the Western Hockey League and 46 with the Pittsburgh Penguins. That was pretty special for me,” said Hall of Fame broadcaster Mike Lange. “I didn’t get cheated in my quest to do what I have always loved. The Penguins have asked me to continue to add commentary and voice work on a limited basis to the current radio set-up and I look forward to staying involved. In the meantime, the best consolation to stepping away is knowing that the broadcast couldn’t be in better hands with the very talented Josh Getzoff, and the Ole ’29-er, Phil Bourque.”

Josh Getzoff will take over all radio play-by-play duties, teaming with veteran analyst Bourque on 105.9 The X and the Penguins Radio Network. Getzoff has called the Penguins road games for the past three seasons, in addition to home games in Lange’s absence over the past two years.

Lange’s relationship with the Penguins began in 1974-75, when he broke into the NHL as a radio play-by-play man. He left for one season, but returned in 1976-77 and has been a fixture on the Penguins’ scene ever since.

Lange did radio exclusively until 1979, when games were simulcast on radio and TV. He served as the television voice of the Penguins through 2005-06, before returning to the radio booth in 2006-07.

A native of Sacramento, California, Lange earned a degree in broadcasting from Sacramento State University before starting his career as the voice of the Phoenix Roadrunners (WHL) in 1970. He also served as the play-by-play voice of the San Diego Gulls (WHL) in 1973-74 and the Washington Diplomats (NASL) before joining the Penguins.

In addition to his tenure with the Penguins, Lange handled play-by-play duties for the Pittsburgh Pirates in 1986-87. A well-known member of the Pittsburgh community, Lange makes numerous personal appearances throughout the year and is actively involved in charity work. 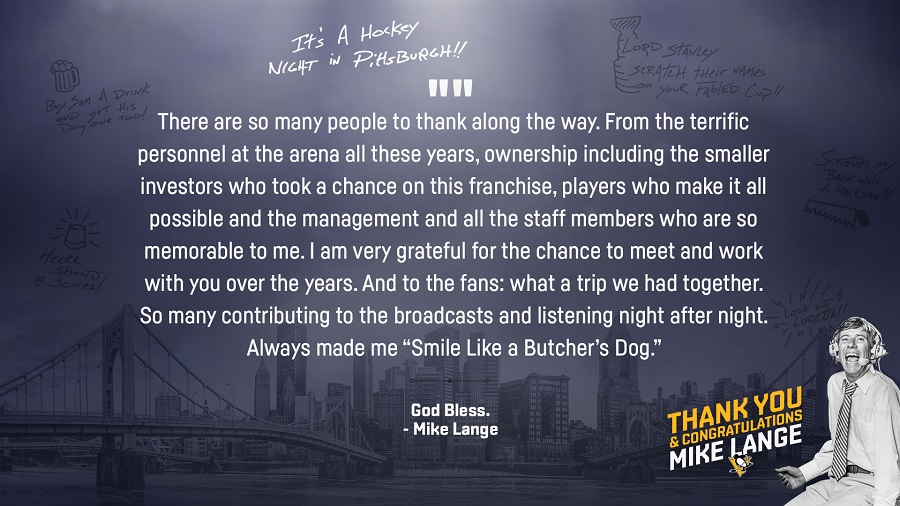