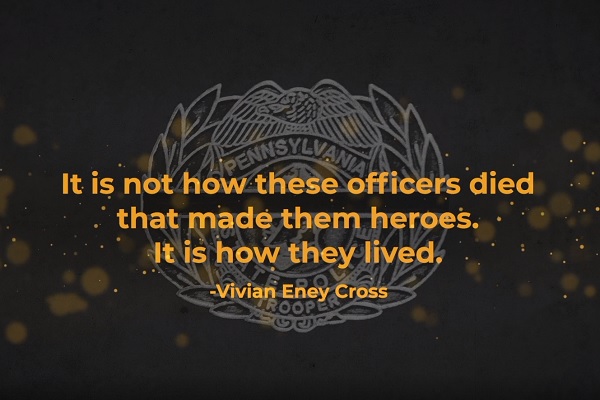 Harrisburg, PA – The Pennsylvania State Police (PSP) was established by Governor Samuel Pennypacker on May 2, 1905, becoming the first uniformed police agency of its kind in the United States. Traditionally, the department pauses each year on May 2 to remember troopers who died in the line of duty with a ceremony at the state police academy in Hershey.

Because of ongoing COVID-19 mitigation efforts, an in-person ceremony was not possible this year. Instead, the PSP Media Unit shared a tribute video on its Facebook page.

The video contains remarks from Colonel Robert Evanchick, commissioner of the Pennsylvania State Police, a reading of the names of 98 PSP members who died in service to the commonwealth since 1905, and footage from previous ceremonies.

“Although circumstances outside our control prevent us from gathering together, the importance of today remains paramount,” said Colonel Evanchick. “It is a reminder that throughout the years, our personnel have responded to trying times by overcoming all challenges they encounter. I am confident that together, we will help Pennsylvania overcome the current public health crisis.”

In recognition of the occasion, Governor Tom Wolf proclaimed May 2 as Pennsylvania State Police Day.

“Today serves as a reminder of the dangers faced by men and women in uniform and the sacrifices they are prepared to make in service to the commonwealth,” said Gov. Wolf. “I ask all Pennsylvanians to pause and remember not only the 98 men who lost their lives, but also all those who have served and are currently serving.”

An online version of the PSP Memorial Wall, with biographical information and photos of those who made the ultimate sacrifice is available at www.psp.pa.gov.

Starting with an original compliment of just 228 men, the department has grown over the past 115 years to an authorized enlisted compliment of 4,719 and is supported by more than 1,700 civilian employees. It is the 10th-largest police agency in the United States.