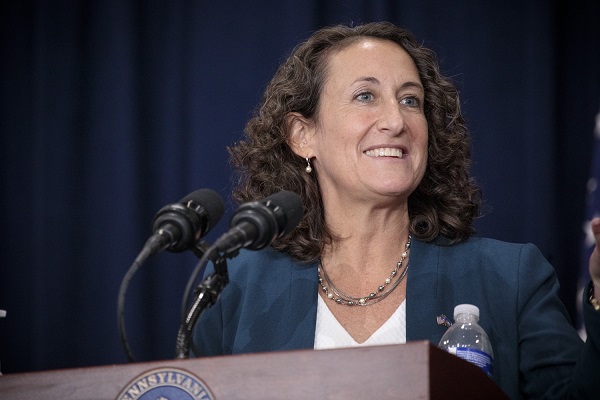 Secretary of State Kathy Boockvar answers questions from the press. The Wolf Administration held a press conference at 11 p.m. to provide updates on the state's general election. NOVEMBER 03, 2020 - HARRISBURG, PA

Harrisburg, PA (AP) — Pennsylvania’s elections chief says she expects the number of ballots left to count in the presidential race to dwindle rapidly from hundreds of thousands.

President Donald Trump and Democrat Joe Biden are fighting for the largest electoral prize yet to be called. Secretary of State Kathy Boockvar said Thursday that it’s a tight race.

She says counties are making good progress. Some of the state’s most populous locales reported finishing their tallies.

The Trump campaign and the Republican Party have filed a flurry of lawsuits. The campaign tried to stop the count in Philadelphia, but a federal judge refused to go along.

Harrisburg, PA – PA Secretary of State Kathy Boockvar says they’re in the homestretch of counting the ballots, but they will continue counting military overseas votes and provisional ballots until Tuesday.

Although this was the first year with the new mail-in system as an option in Pennsylvania, Boockvar says it’s really not different than the absentee ballot that Pennsylvania has been using for decades… it’s just this time, there are a lot more of them.

Boockvar says the closeness of the race means that it’s taking longer than usual to call a winner.