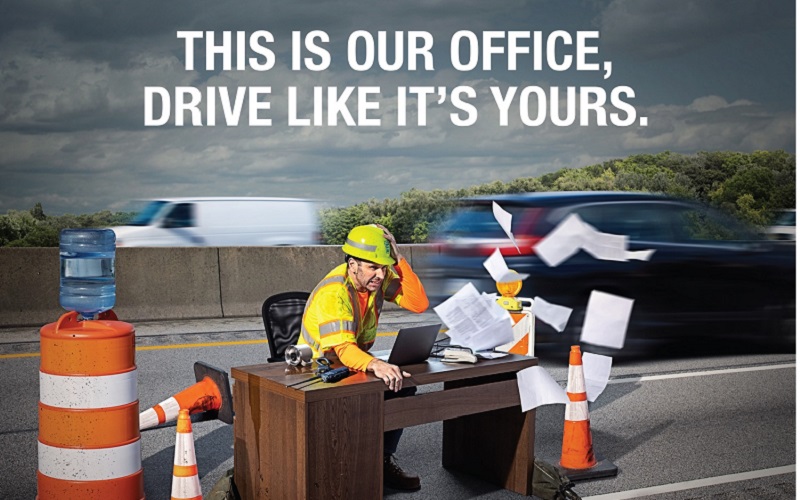 Harrisburg, PA – The Pennsylvania Department of Transportation (PennDOT), the Pennsylvania State Police (PSP), the Pennsylvania Turnpike Commission (PTC), and Associated Pennsylvania Constructors (APC) hosted an event today urging motorists to slow down and pay attention in work zones ahead of National Work Zone Awareness Week (NWZAW). The week, which runs April 11-15, is designated to highlight the critical importance of safe driving through work zones. The theme of this year’s NWZAW is “Work Zones are a Sign to Slow Down.”

“We are beginning another construction season,” said PennDOT Secretary Yassmin Gramian. “Too often this means hazards for the men and women who are delivering improved roads and bridges. These workers deserve to get home safely. Please slow down and never drive distracted, especially in work zones where roadway conditions can change every day.”

According to preliminary PennDOT data, in 2021 there were 1,617 work zone crashes, resulting in 15 fatalities. Additionally, since 1970, PennDOT has lost 90 workers in the line of duty. The PA Turnpike has lost 45 workers since 1940.

With a mock work zone in the background, PA Turnpike CEO Mark Compton referenced the hazards of working so close to live traffic. “Our crews are doing their jobs, day in and day out, mere inches from live traffic,” Compton explained. “Our colleagues have been injured and lives have been taken when drivers do not pay attention to construction signage, respect posted speeds or maintain a safe distance.”

In Pennsylvania, there are two distinct programs related to active work zones. Under Title 75, Section 3326, motorists caught by police driving 11 mph or more above the posted speed limit in an active work zone, or who are involved in a crash in an active work zone and are convicted for failing to drive at a safe speed, automatically lose their license for 15 days. Additionally, fines for certain traffic violations — including speeding, driving under the influence, and failure to obey traffic devices — are doubled for active work zones. The law also provides for up to five years of additional jail time for individuals convicted of homicide by vehicle for a crash that occurred in an active work zone.

Under Title 75, Section 3369, fines are allowed to be administered through the Automated Work Zone Speed Enforcement (AWZSE) program. Pennsylvania’s AWZSE program, first implemented in March 2020, uses vehicle-mounted systems to detect and record motorists exceeding posted work zone speed limits by 11 miles per hour or more using electronic speed timing devices. AWZSE systems are only operational in active work zones where workers are present. Work Zones that have an AWZSE system present and active will have unique signs in advance of the enforcement area, alerting drivers to the upcoming enforcement. Registered owners receive a warning letter for a first offense, a violation notice and $75 fine for a second offense, and a violation notice and $150 fine for third and subsequent offenses. These violations are civil penalties only; no points are assessed to driver’s licenses.

In 2021, PSP supported 101 projects for work activities where existing enforcement remains the most effective tool. The combination of existing and automated enforcement continues to be applied in a complementary manner and is yielding benefits in Pennsylvania work zones.

“Increased penalties in work zones and the implementation of the AWZSE program have made Pennsylvania’s work zones safer,” said Major Robert Krol, Director of the Pennsylvania State Police Bureau of Patrol. “The PSP is committed to supporting safety across Pennsylvania’s roadways.”

During 2021’s primary construction months (April – November), speeding in AWZSE enforced work zones was reduced to 20 percent of all traffic, down from 35 percent at the start of the program. Similarly, excessive speeding (11 mph or more over the posted speed limit) was reduced to three percent from eight percent at the start of the program. Additionally, improvements in driver behavior have been observed through not only sustained speed reductions in AWZSE-enforced work zones, but also smaller, but measurable, reductions at times when AWZSE is not in effect in those zones.

“Ultimately, this program is not about issuing violations,” said Gramian. “The goal is to change driver behavior. We want all motorists to slow down and drive safely so that enforcement programs like AWZSE are no longer needed.”

Associated Pennsylvania Constructors Executive Vice President Robert Latham emphasized that highway workers risk their lives every day in order to maintain a roadway system that is safe for the motoring public. “We’re asking that motorists do their part to keep highway workers safe, too,” said Latham. “It only takes a moment of distraction to cause an injury or fatality. Slow down and stay alert.”

For more information on the Automated Work Zone Speed Enforcement program, including a list of projects where the units are deployed, visit https://workzonecameras.penndot.gov/.

For more information on work zone safety and an opportunity to take the safe-driving pledge, visit https://www.idriveorange.com/.