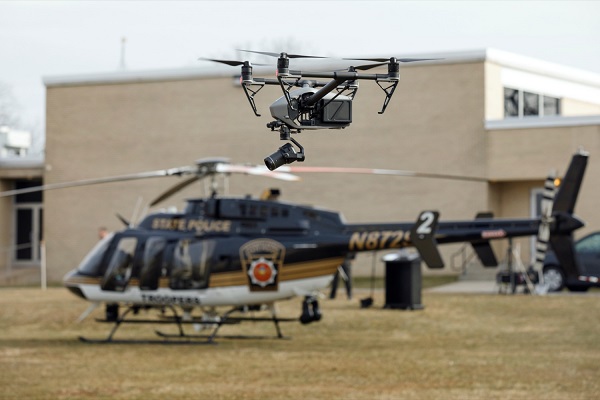 Hershey, PA – As the popularity of drones continues to increase across the country, the Pennsylvania Governor Tom Wolf highlighted the danger these unmanned aircraft can pose to helicopters in emergency situations.

According to the Federal Aviation Administration (FAA), there are more than 1.5 million drones registered in the United States, and they are being used for everything from recreation to commercial and military applications.

The Pennsylvania State Police (PSP), Pennsylvania Department of Transportation (PennDOT), Pennsylvania Emergency Management Agency (PEMA), Office of the State Fire Commissioner (OSFC), the Department of Health (DOH) and Penn State Health Life Lion Critical Care Transport came together at the PSP Academy in Hershey to discuss how drones in the airspace can not only delay connecting individuals to the care or help they need, but also put the operators in harm’s way.

“PennDOT is excited about the potential that drone technology holds,” said Jennie Granger, PennDOT’s Deputy Secretary for Multimodal Transportation. “But as with any new technology, it’s critical that safety is at the forefront of the conversation, and that all drone operators follow FAA regulations when operating.”

All drones, both recreational- and commercial-use, must be registered with the FAA. Recreation and commercial drone operators must follow FAA guidelines. One of those guidelines is to not interfere with emergency response activities. In addition, the Pennsylvania’s Unmanned Aircraft Systems (UAS) Law makes it a crime to operate a drone in the following circumstances:

• to conduct surveillance of another person in a private place;

• in a fashion that places another person in fear of bodily injury; and

“Safety of the troopers in state police helicopters and everyone on the ground is our top priority when flying any mission,” said Captain Gary Vogue, director of the Tactical Operations Division of the Pennsylvania State Police Bureau of Emergency and Special Operations. “A police helicopter’s flight path and altitude may change abruptly and with little warning. We ask drone operators to keep safety in mind and leave the area or land their unmanned aircraft when they see a police or EMS helicopter in the sky.”

“What drone operators may not realize is that an EMS helicopter cannot land when there is a drone in the vicinity,” Deputy Secretary for Health Preparedness and Community Protection Ray Barishansky said. “This means that there may be a significant delay to getting care to a patient. This is not just an inconvenience, but it can be a life or death situation. We urge operators to be aware of regulations, and to help keep the air space safe at any emergency scene.”

There are 81 licensed air ambulances in Pennsylvania. In 2019, there were more than 21,000 calls for air medical services. First responders also use drones as a tool to assist them in searching for missing persons, in firefighting activities and to protect public safety.

“The utilization of drones in firefighting applications has been accelerating for some time,” State Fire Commissioner Bruce Trego said. “These devices are providing departments with new capabilities, and affording them critical situational awareness data that saves lives. These benefits are not without cost; however, and we want to ensure that operators are using them safely and in accordance with the applicable laws.”

“Having worked as a flight paramedic and being a certified drone pilot, I am acutely aware of the hazards that drones pose to emergency response and disaster operations when they are not operated in accordance with federal regulations or their use is not coordinated with emergency response agencies,” said PEMA Director Randy Padfield. “It’s vital for drone operators to understand that official emergency response activities take priority over personal attempts to get pictures or video of an incident scene by using a drone, and that use of a drone during an emergency may result in significant safety issues for emergency responders as well as delay vital care to those who are injured or in need of rescue.”

It is important to know that the FAA is responsible for the safety of U.S. airspace. Anyone who chooses not to operate a drone legally could face civil penalties, and potentially criminal prosecution.

For more information on drone operation and registration, visit www.faa.gov.