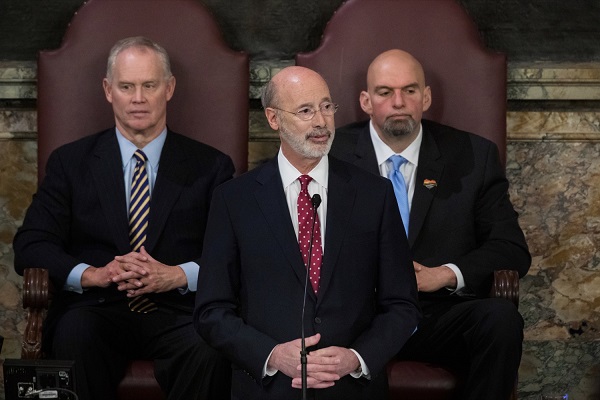 Pennsylvania Governor Tom Wolf delivers his sixth budget address to a joint session of the general assembly inside the House of Representatives chamber at the State Capitol in Harrisburg on Friday, December 13, 2019.

However, the Democrat’s budget proposal rolled out Tuesday is likely to face a skeptical Republican-controlled Legislature. The budget would increase spending through the state’s main bank account to $36 billion for the 2020-21 fiscal year starting July 1.

Including nearly $600 million for the current fiscal year, Wolf is seeking authorization for another $2.6 billion in new spending. That’s 7.6% more.

The plan would hold the line on sales and income taxes.

Video from PAcast.com, with video provided by government officials.

Harrisburg, PA – Governor Tom Wolf’s $36 billion budget proposal for Pennsylvania for 2020 represents a $1.4 billion — or 4.2 percent — spending increase from the state’s current spending plan. The governor renewed his call for a new tax on natural gas production but did not propose any general tax hikes, saying revenue surpluses generated by a strong economy and low unemployment would allow for a balanced budget. The governor called again for a minimum wage increase to $15 an hour and a fee on municipalities to fund state police protection.

He called for increased funding for education on all levels: early learning, K-12, and higher education. He’s proposing full-day kindergarten across the state and a new scholarship program for state university graduates who agree to work in Pennsylvania. The new scholarship program, named after Pennsylvania native and journalist Nellie Bly, would devote $200 million in its first year to provide need-based aid to cover tuition, books and supplies for low- and middle-income students. Scholarship recipients must stay in the Keystone State for as many years as they received assistance. The program would be funded by transferring money from a state-administered fund for the horse racing industry.

Gov. Wolf’s budget would change how charter schools calculate their tuition rates and special education payments, saving school districts a combined $280 million in charter school transfers, according to estimates from his administration.

The governor pledged one billion dollars to clean asbestos, lead and other toxins from school buildings statewide.

He also used his budget address to highlight additional funding for gun-violence prevention programs, including $6 million in grants to community-based gun violence prevention programs and $4 million to the Philadelphia Gun Violence Task Force. He renewed calls to pass gun control — such as universal background checks, mandatory reporting of lost and stolen firearms, and an extreme risk protection law.

Harrisburg, PA – In the wake of the governor’s annual state budget address, state Reps. Matt Gabler (R-Clearfield/Elk) and Tommy Sankey (R-Clearfield/Cambria) expressed their disappointment in Gov. Tom Wolf’s 2020-21 budget proposal, a plan they describe as having “too much debt, too many taxes, and vast overspending.”

“While we all thought Groundhog Day came and went last weekend, the governor’s speech shows us it is truly ‘Groundhog Day’ once again,” Gabler said. “Today, we heard a rehash of the same old tired, rejected proposals from years gone by. The bottom line is this budget contains an overwhelming amount of borrowing, taxes and spending that will not serve the Pennsylvanians of today and will especially fail future generations by saddling them with a load of crushing debt.”

“Citizens of our area understand they can spend only what they have – not what they dream of having,” added Sankey. “This plan dreams of spending $5 billion we simply do not have. The governor needs to put his ear to the ground and listen to what ALL Pennsylvanians are saying, not just those in the cities.”

Gabler, who authored the first piece of legislation (Act 77 of 2013) to reduce the state’s debt limit for projects in the Redevelopment Assistance Capital Program, finds Wolf’s desire to reverse course and increase the program’s debt level troubling.

“Wolf is proposing to add a billion dollars to a program that allows politicians to borrow from future taxpayers to finance the political projects of today,” said Gabler. “Spending irresponsibly in this manner ignores future generations and allows the governor to pick pet projects. With no intent to direct money to the Rainy Day Fund, the governor’s proposal is more likely to benefit political cronies rather than the long-term best interests of the citizens of Pennsylvania.”