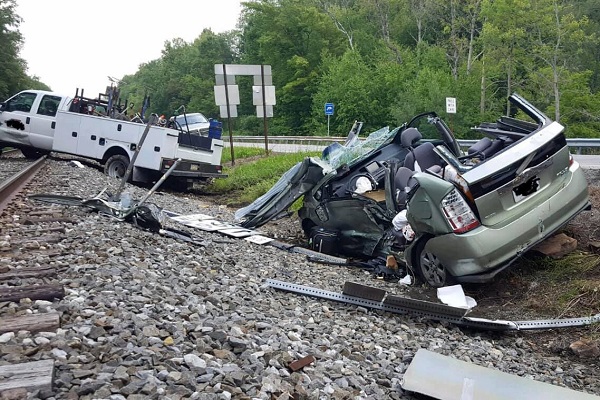 Ferguson Township, PA – One person had to be flown by medical helicopter from the scene of a crash on Lumber City Highway in Clearfield County.

It happened Thursday just before 5 p.m. on the road that connects Curwensville to Mahaffey in Ferguson Township.

Initial reports said it was a two-vehicle crash with one person entrapped.

A landing zone had to be set up at the Eagles Ridge Golf Course nearby, and the unknown victim was flown to a trauma center.

Any other details are still limited.

Photo is courtesy of the Curwensville Rescue Hose and Ladder Company.

At 16:51, Company 8 was dispatched for a two vehicle accident along the Lumber City Highway in Ferguson Township. Initial reports advised of a two vehicle crash, with several patients, including one entrapped. Rescue 8-1, Engine Tanker 8-2, 852, and 853 all responded. Deputy 8 arrived first on scene, assumed command, confirmed the report, and requested a medical helicopter be put in the air. Company 8’s crew arrived on scene and went to work. Several hydraulic spreaders, cutters, and rams were placed in service to remove multiple doors, b-posts, and the roof to gain access to, and ultimately free the patient. Extrication was marked complete in 14 minutes. Meanwhile, Attack 29 was diverted to Eagles Ridge Golf Course to establish a landing zone for Stat Medevac 9. One patient was subsequently airlifted to a trauma center. Company 8 was also assisted on scene by Medic 1, Cumming’s Towing, Tibbens Towing, and PSP Clearfield.