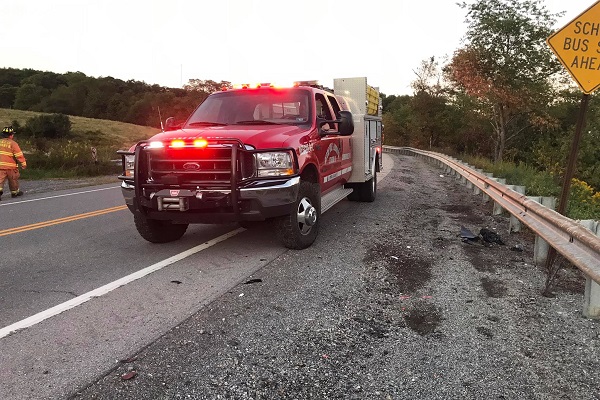 Ferguson Township, PA – A motorcyclist had to be flown by medical helicopter from the scene of a crash in Clearfield County on Monday.

Just before 7 p.m., crews were called out for a crash on Lumber City Highway and Farm Road in Ferguson Township, near the Curwensville area.

The lone rider had been ejected over an embankment, and emergency crews had to use a rescue basket to lift the victim.

A medical helicopter landed at Eagles Ridge Golf Course nearby, and the motorcyclist was taken to a trauma center.

Photo courtesy of the Rescue Hose and Ladder Company.

***Motorcycle Crash***
Monday evening at 18:56, Company 8 was dispatched for a vehicle accident along the Lumber City Highway in Ferguson Township. Rescue 8-1, Engine Tanker 8-2, Rescue 8-2, 853, and 852 all responded. Crews arrived to find a lone motorcycle that had left the roadway, laid over on its side, and struck a guide rail. The crash then caused the lone rider to be thrown over the guide rail and over the embankment. Crews extricated the patient from over the embankment via stokes basket, and into 853. Meanwhile, Attack 29 established a landing zone at the Eagles Ridge Golf Course for Stat MedEvac 9. From there, the patient was subsequently airlifted to a trauma center. Company 8 was assisted by PSP Clearfield, Mahaffey fire department, and Cummings Towing and Recovery, LLC. Company 8 operated on scene for approximately an hour before returning available.