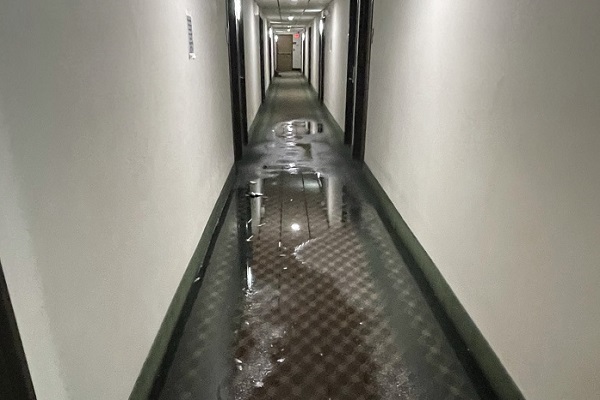 Lawrence Township, PA – A Clearfield man reportedly started a fire at a hotel recently, setting off the sprinklers and causing a flood.

32-year-old Aaron Schmitt had been staying at the Super 8 Hotel in Clearfield.

Early Thursday morning, just before 3 a.m., Lawrence Township Police and fire crews were called to the hotel for a smoke alarm and a room flooding with water.

When they got to Schmitt’s room, the entire floor was flooded and the fire sprinkler was actively spraying water in the bathroom.

They found Schmitt’s cat cowered on the corner of the bed, trying to stay dry. Officers took the cat to Schmitt where he was waiting in the hotel office, but Schmitt reportedly slammed the door on officers, threw the cat on the ground, and began to fight with law enforcement.

He was eventually cuffed and taken into custody.

Lawrence Township Volunteer Fire Company #5 says they were on scene for about 2 hours cleaning up the mess.

Schmitt was housed in the Clearfield County Jail on attempted arson, criminal mischief, resisting arrest, and other related charges.

Click Here to see the report from Lawrence Township Volunteer Fire Company (does not contain arrest details, only info about fire response).

Curwensville man charged with four felonies including rape and assault