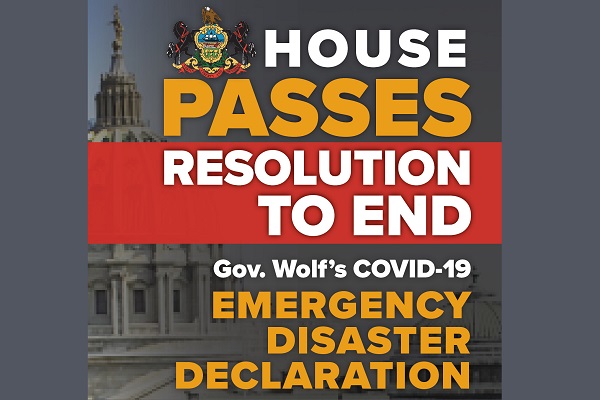 The resolution will now be considered by the Senate.

On passage of the resolution, Speaker Cutler and House Majority Leader Benninghoff made the following statement:

“Over the past 16 months, Pennsylvanians have had their lives upended, their livelihoods destroyed, and their liberty interrupted by Gov. Wolf’s inconsistent and unilateral use of powers under the COVID-19 emergency disaster declaration. When the voters approved these constitutional amendments just a few short weeks ago, their message was loud and clear: It is time to end the governor’s emergency powers. We could not agree more.

“The emergency is over. Our hospitals are not overrun, successful vaccines are available and abundant, our schools are prepared to teach in person and Pennsylvanians are back to work. The time is now to end the declaration.

“Make no mistake: The governor’s ability to exercise unilateral rule over the Commonwealth under the existing emergency disaster declarations will finally be coming to an end. Certain regulations that have proved to benefit Pennsylvania may need to be further suspended or waived and we will run legislation to address them as part of the budget process. We have listened to the voters and are turning their vote into action.”