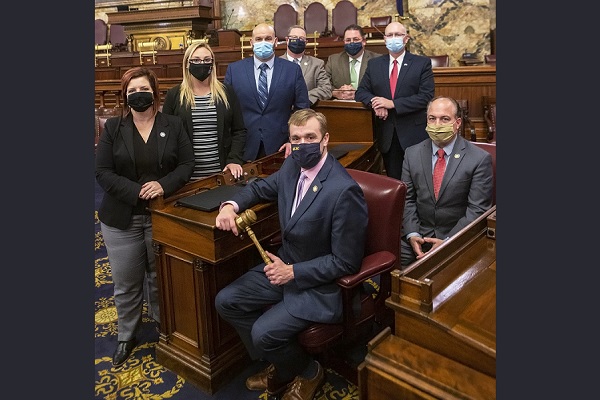 House Republicans have entrusted the role of Speaker of Pennsylvania’s House of Representatives to Rep. Bryan Cutler, nominating him to return to his current role for the upcoming 2021-22 Legislative Session. Cutler had been elected speaker of the House in June after Rep. Mike Turzai’s sudden resignation and retirement.

On their election, the following members of leadership made statements:

Speaker-designee Bryan Cutler (R-Lancaster):
“Our chamber is one of the oldest democratically elected bodies in the world. Over the course of our Commonwealth’s history, our members have pushed our nation forward by always answering the call of our constituents to face ever-evolving challenges. I am honored and inspired to join with these proven, principled and selfless public servants to continue to answer the call to improve the lives of Pennsylvanians and stand humbled and ready to oversee another successful session.”

House Majority Leader Kerry Benninghoff (R-Centre/Mifflin):
“Led by our message of fiscal responsibility, adding common sense to our COVID-19 response, and ensuring government is responsible to the people, the voters of Pennsylvania have returned a significant Republican majority back to the Pennsylvania General Assembly. I am proud to lead our caucus in our ongoing mission to be the true voice of the people and work to improve the lives of Pennsylvanians everywhere.”

Majority Whip Donna Oberlander (R-Clarion/Armstrong/Forest):
“Today’s leadership election sends a strong message that we, as a caucus, are poised to use our growing strength in order to confront the challenges facing our Commonwealth in the next two years,” said Oberlander. “Together, we will work toward building a stronger Pennsylvania to put forth good public policy and continue to assert ourselves as a co-equal branch of state government.”

Majority Appropriations Chairman Stan Saylor (R-York):
“I am honored to have the opportunity to serve as House Appropriations Committee Chairman for another session. Together, we have held the line on taxes and kept spending restrained. I am confident that our caucus will continue to be leaders in good government reform, private sector job creation and fiscal responsibility next session.”

Majority Policy Committee Chairman Marty Causer (R-Cameron/McKean/Potter):
“I am deeply honored by the continued opportunity to help lead our caucus and our Commonwealth through these very challenging times. Pennsylvania is a diverse state, and in my role as policy chairman, I will focus on building consensus on policies that move us forward as we work to reopen our economy, protect public safety and improve quality of life for all Pennsylvanians.”

Majority Caucus Chairman Mike Reese (R-Westmoreland/Somerset):
“I am honored to serve our caucus in this new capacity. The ongoing issues surrounding the questionable COVID-19 mitigation efforts put in place by the administration, as well as contentions surrounding the 2020 election cycle, will be our principle workload. This is in addition to continuing to grow our economy and reforming some archaic state regulations. I look forward to working with my colleagues on the House on these important matters.”

Majority Caucus Secretary Martina White (R-Philadelphia):
“I am honored to have been chosen to serve in this position and to represent the people of southeast Pennsylvania during leadership discussions,” said White. “I look forward to the additional responsibilities I will be assuming, while continuing to diligently work for the people of the 170th Legislative District.”

Majority Caucus Administrator Kurt Masser (R-Northumberland/Columbia/Montour):
“I’m honored to garner the support of my colleagues to continue serving in a leadership position within the caucus,” Masser said. “We will continue pushing for policies that promote economic growth while protecting the health and safety of our residents.”