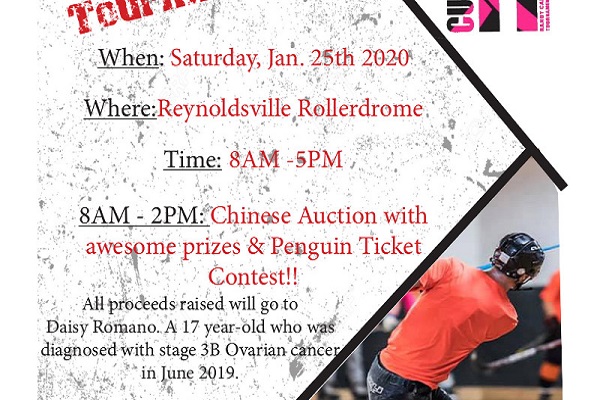 Reynoldsville, PA – Help raise proceeds for Daisy Romano, a 17-year old who had stage 3B Ovarian cancer, by going to a basket raffle and Penguin ticket contest at the Reynoldsville Rollerdrome from 8 a.m. to 5 p.m. on Saturday, Jan. 25.

If Daisy’s story sounds familiar, it’s because you might have heard her during our 2019 Make-A-Wish fundraiser week on Sunny 106! Daisy’s wish is to visit Hawaii.

Listen to the full interview with Summer Anderson, one of the organizers of the event.

Last year, the hockey teams and community members raised $4,902 for the family of Bentley Landis, who was 2 years old at the time. He was diagnosed with leukemia in late 2018.

In 2018, the hockey tournament brought in $2,200 in donations, split between the families of Brock Roy and Maddox Hyde. What do you want for your birthday? It’s a question we were all asked when we were little. Depending on your age, the answers vary. Legos or a play kitchen? How about a new pair of shoes or a new iPhone?

But what if your answer was simply to live and be healthy? That’s an uncommon answer, but for a teenage girl from DuBois, it’s the best gift she could have ever ask for.

It was recently Daisy Romano’s birthday. She turned 17. And thanks to some great news, she can expect to celebrate many more!

If you follow the Pittsburgh Penguins on Facebook, you may have seen the video of a young lady ringing a bell during Saturday’s Penguins game against the Maple Leafs.

The bell was an announcement that she is cancer free. The girl ringing that bell was Daisy and she got to do so in front of 18,000 cheering fans.

While she may be cancer free, the battle took a toll on her and her family, not just physically, but financially. Many trips to and from the hospital, many overnight restless hotel stays, and of course medical bills would be a burden on any family. That is where we come in.

The XHL wants to help by making her this year’s Randy Carlson tournament beneficiary.

This year’s event will take place on Saturday, January 25th at the Reynoldsville Rollerdrome. It will be the 13th time the tournament has been held in memory of Randy Carlson, a former player who passed away from melanoma in 2004.

“We are honored to once again be able to help a local family,” tournament co-chair Bob Anderson said. “We all have friends and family that have been personally affected by cancer. We are always happy to be able to help in any small way we can. In this case, that means helping a family put their life back together after a difficult battle.”

Daisy had stage 3B ovarian cancer. A 4.5-pound tumor was found in her uterus on June 5th. According to healthline.com, stage 3B cancer “is when the cancer has spread to nearby organs within the pelvis.”

The Randy Carlson tournament has raised over $15,000 for cancer related charities in the past. Last year’s event raised a whopping $5,000 alone. Can we beat that this year?

The tournament has become one of the highlights of the year for many XHL players and even some out-of-town participants. A record 18 teams and 90 players took part in the event last year.

“We’ve always had tremendous support for this tournament,” Anderson said. “It starts with the Schuckers family who allow us to use the rink all day and play at no cost. It includes many others businesses and organizations who provide donations. And of course we wouldn’t have any success without the players themselves who have always been so generous!”

Donations are being accepted for Chinese auction prizes and teams are now welcome to register to play. That can be done on Facebook or by emailing Bob at xhl_hockey@hotmail.com.