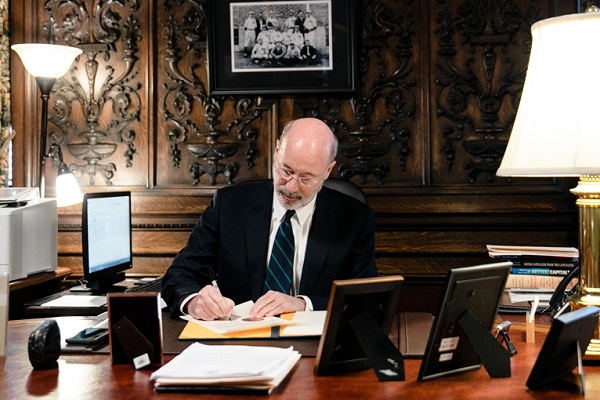 Harrisburg, PA (AP) — Gov. Tom Wolf is renewing a 90-day disaster declaration, now for a second time, after he originally signed it in early March following the confirmation of the first positive cases of the coronavirus in Pennsylvania.

The original declaration was set to expire Tuesday, and the new declaration will last through late November, unless Wolf decides to end it.

Under state law, an emergency disaster declaration gives governors the authority to issue or rescind executive orders and regulations, access stockpiles of emergency supplies and equipment and suspend laws or regulations that govern state agencies.

The PA House Republicans group are meeting today to discuss holding Gov. Wolf accountable on the 180-anniversary of his COVID-19 emergency declaration. The discussion will be held at the first break of session, whenever that might be.

Live webstreaming will be available, barring technical difficulties, at www.PAHouseGOP.com.

Harrisburg, PA – Governor Tom Wolf signed a second renewal of his 90-day disaster declaration for the COVID-19 pandemic yesterday. He originally signed it March 6 following the announcement of the first two presumptive positive cases of the virus in the commonwealth.

“As we approach the six-month mark of this crisis, I continue to be amazed at the resiliency and strength shown by Pennsylvanians during this pandemic,” Gov. Wolf said. “We are going to continue to combat the health and economic effects of COVID-19, and the renewal of my disaster declaration will provide us with resources and support needed for this effort.”

The emergency disaster declaration provides for increased support to state agencies involved in the continued response to the virus and recovery for the state during reopening. This includes expediting supply procurement and lifting certain regulations to allow for efficient and effective mitigation.

The disaster declaration has allowed for waivers and extensions to continue to provide for Pennsylvanians and businesses under the unprecedented circumstances of the pandemic, including the ability to waive the one-week waiting period to receive unemployment compensation, work search requirements, and the registration with PA CareerLink for applicants, and to provide relief from charges for employers; and allowing the commonwealth to suspend numerous training requirements and certification and licensure renewals for health care professionals, child care workers, direct care workers, direct support professionals, among other professional groups who provide life-sustaining services to our children, seniors, and vulnerable residents.

Through the disaster declaration, PEMA has been able to mission assign the National Guard to provide various types of support for long term care facilities, including providing direct patient care support, ancillary support, and testing, and at community-based testing sites. It also provides PEMA with the ability to leverage continued federal support such as non-congregate sheltering.

The renewed disaster declaration will continue to support all of these efforts, as well as allow PEMA to rapidly scale response efforts and employ new intervention tactics, such as the administration of a vaccine.

The Department of Health’s Department Operations Center at PEMA continues to be active, as is the CRCC there.

Read the amendment to the emergency disaster declaration here.