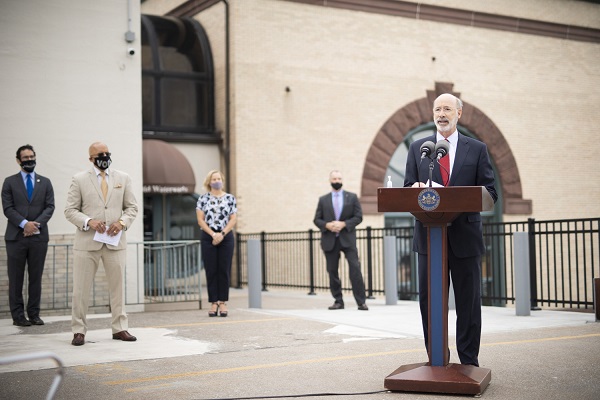 Pennsylvania Governor Tom Wolf speaking at the a press conference. As Pennsylvanians continue to fight the health risks of COVID-19, Governor Tom Wolf is calling for the General Assembly to pass legislation for paid sick and family leave for workers who need to miss work for an illness or to take care of a loved one. The governor was joined for a press conference at andculture, a Harrisburg design firm that supports paid sick leave, by Senators Vincent Hughes, Maria Collett and Pam Iovino and Reps. Mike Schlossberg and Steve Malagari. Harrisburg PA – August 31, 2020

Harrisburg, PA – Several state Senators and House members joined Governor Tom Wolf in calling for the General Assembly to pass legislation for paid sick and family leave for workers who need to miss work for an illness or to take care of a loved one.

The governor was joined for a press conference by Senators Vincent Hughes, Maria Collett and Pam Iovino and Reps. Mike Schlossberg and Steve Malagari.

Critics of the policy say it’s too unclear where the money for paid sick leave would come from, with small businesses already struggling with thin profit margins.

Harrisburg, PA – As Pennsylvanians continue to fight the health risks of COVID-19, Governor Tom Wolf is calling for the General Assembly to pass legislation for paid sick and family leave for workers who need to miss work for an illness or to take care of a loved one.

“Pennsylvanians are working hard, especially during this pandemic, and they should not have to choose between losing a day’s pay or going to work sick,” said Gov. Wolf. “It’s time for the General Assembly to stand up for Pennsylvania’s workers and protect the health of all Pennsylvanians.”

Paid sick leave can be used to recover from an illness, such as COVID-19, for medical appointments, to care for a family member, or to seek help from abuse or violence.

“Pennsylvania workers have waited long enough, and the pandemic has made the need for paid sick leave more urgent,” said Gov. Wolf. “All employees should have healthy and safe workplaces. There are many paid sick and family leave bills in the legislature, and I’m committed to working with the General Assembly to finally get workers the earned leave they deserve.”

Enacting a paid sick leave law would help an estimated 400,000 Pennsylvanians, particularly low-wage workers who are forced to work when ill, risking their health and the employees and customers around them. Providing paid sick leave would improve public health and help to prevent more people from getting sick.

The governor was joined for a press conference at andculture, a Harrisburg design firm that supports paid sick leave, by Senators Vincent Hughes, Maria Collett and Pam Iovino and Reps. Mike Schlossberg and Steve Malagari.

“Working people deserve employer-paid sick leave so they can attend to the health and wellness of themselves or their families when necessary,” said Sen. Vincent Hughes. “Whether we are in a pandemic or conducting business as normal, the lack of paid sick leave is an overwhelming stressor on our low-income workers, our health care system, and public health in general. Employer-paid sick leave is already working in Philadelphia and Pittsburgh. The General Assembly must prioritize protecting hundreds of thousands of low-income Pennsylvanians who stand to benefit from adopting paid sick leave across the commonwealth.”

“Even before COVID hit, Pennsylvania’s families were in trouble,” said Sen. Maria Collett. “As a prime sponsor of SB 580, the Family Care Act, I was painfully aware that more than 80 percent of hardworking Pennsylvanians had no form of paid leave to care for themselves or a sick loved one without fear of losing their jobs. Over the past few months, we’ve been putting Band-aids on bullet holes to help families and small businesses try to survive. But bigger, systemic changes are required, and I am glad to see Governor Wolf stepping up and supporting programs like paid leave that are both widely supported and long overdue.”

Rep. Mike Schlossberg added, “We’ve heard a lot of talk about essential workers in the last six months. Opponents of sick leave will argue that every worker is essential. That’s a perfectly valid argument to make if it’s one backed up with policy. You can’t tell a worker they are essential and then tell them their health is irrelevant.”

“No employee should ever have to choose between taking care of a sick family member and keeping their job; and no employer should have to choose between the health of their business and loyalty to their workers,” said Sen. Pam Iovino. “That was true before the pandemic hit, but now, as working families and businesses in my district and across Pennsylvania persevere through this challenge, paid family leave has become an absolute necessity for the health of our families and our economy. I am committed to working with my colleagues on getting a bipartisan bill to Governor Wolf’s desk.”

Eight states and Washington D.C. have approved legislation to create paid family and medical leave insurance programs. The loss of productivity in the United States economy from illness in the workplace is $160 billion annually, mostly due to employees coming to work while sick, according to the Main Street Alliance. An estimated $1 billion is spent on health care costs due to lack of paid sick days, the Alliance concluded.

Today, the governor also announced that the commonwealth’s new paid parental leave policy will take effect Oct. 15. Commonwealth employees will be eligible for up to six weeks of paid parental leave to care for a child after a birth, adoption, or foster care placement. The new policy is separate from any accrued sick or paid time off that the employee may have earned.

Expanding opportunities for new parents to spend time with children following a birth, adoption or foster placement helps to build connections and strengthen families, which is critical to health and development.

Paternal leave also helps to bridge the gap to child care programs that often require newborns to be at least six weeks old to enroll. If parents have paid family leave, they can spend time with their baby without having to worry about a paycheck. Paid parental leave is also a valuable benefit to attract new employees and encourage experienced employees to return to work and resume their careers following the welcoming of a new child to their family.