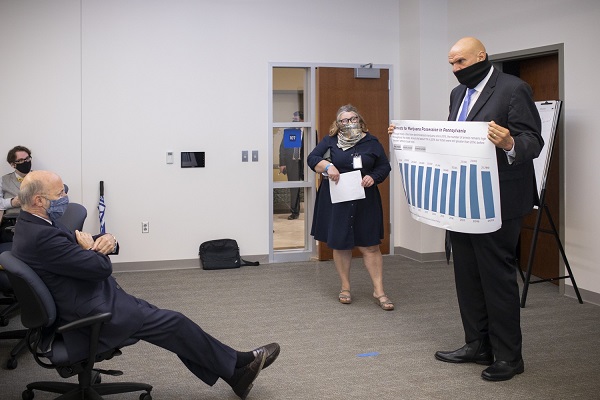 Lt. Gov. John Fetterman speaking with Governor Tom Wolf before the event. Governor Tom Wolf and Lt. Governor John Fetterman today called on the legislature to take up the legalization of adult-use cannabis to help with the state’s economic recovery amid COVID-19. Legalization will also create more outlets for important restorative justice programs in the commonwealth. Harrisburg, PA – Sept. 3, 2020

Harrisburg, PA – Governor Tom Wolf and Lt. Governor John Fetterman called on the legislature to take up the legalization of adult-use cannabis to help with the state’s economic recovery amid COVID-19. Legalization will also create more outlets for important restorative justice programs in the commonwealth.

“Now more than ever, we see a desperate need for the economic boost cannabis legalization can provide. So today I am proposing we legalize adult-use cannabis here in Pennsylvania with a portion of the revenue going toward existing small business grants,” Gov. Wolf said. “Half of these grants would be earmarked for historically disadvantaged businesses, many of which have had difficulties attaining other assistance because of systemic issues.

“The other portion of the revenue will go toward restorative justice programs that give priority to repairing the harm done to crime victims and communities as a result of cannabis criminalization.”

Lt. Governor Fetterman elaborated on the need for legislative action to provide for much-needed restorative justice.

“It has been nearly a year since Governor Wolf and I urged the legislature to act on immediate decriminalization and start the discussion about legalization,” Lt. Governor Fetterman said. “Now more than ever, we must stop prosecuting people for doing something that most Pennsylvanians don’t even think should be illegal.”

The governor also mentioned the economic benefits states with legal adult-use cannabis have realized. There are now 11 states plus the District of Columbia with legalized cannabis.

“Some states that have legalized adult-use cannabis have received millions in additional revenue,” Gov. Wolf said. “In Washington state, adult-use cannabis brought in $319 million in tax revenue in 2018. In Colorado, that figure topped $266 million, and provided the city of Aurora with $900,000 to open a space for people experiencing homelessness. And these figures don’t count the secondary economic benefits of new businesses opening.”

“Communities across our commonwealth are suffering,” said Sen. Sharif Street, who joined the governor and the lt. governor at the event. “Government has a responsibility to provide for and protect Pennsylvanians without cutting vital support systems or levying new taxes during a pandemic. After years of disparate enforcement of marijuana laws, which drives mass incarceration, social justice reform must be central to any policy on adult use. I’m proud to support Governor Wolf in this effort.”

The governor, with the realization that standing up a legalized adult-use cannabis program will take time, called on the legislature to take immediate action to decriminalize possession of small amounts of marijuana, changing the charge from a misdemeanor of the third degree, which can result in jail time, to a summary offense, which does not.

“I stand with the Governor and Lt. Governor in support of legislation legalizing adult-use cannabis because this issue is about far more than money,” said Rep. Jake Wheatley. “This is about criminal and social justice reform and righting past wrongs. It is about creating a flourishing new industry to help keep people safe and educate them on responsible use. Especially during a pandemic, we need to provide every avenue for relief and this one is well overdue.”

Since that report was released, nothing has moved forward in the legislature.

With the onset and continued effects of COVID on our commonwealth, on Aug. 25, Gov. Wolf called for adult-use cannabis as part of his broad fall legislative agenda.

Along with the call to the General Assembly to pass legislation legalizing the sale and use of adult-use cannabis, Gov. Wolf proposed that a portion of the revenue be used to further restorative justice programs that give priority to repairing the harm done to crime victims and communities as a result of marijuana criminalization.

In October 2019, Gov. Wolf, Lt. Gov. Fetterman and Board of Pardons Secretary Brandon Flood outlined how the then-recent expedited pardons process could benefit those who have low-level marijuana convictions by asking the Board to expedite those pardons. However, the governor and lt. governor know there is more to be done.

The Pennsylvania Family Institute issued a press release countering the governor’s press conference, standing against the legalization of marijuana.

Read the press release from the PA Family Institute below:

(HARRISBURG, PA – September 3, 2020) At a Harrisburg press conference, Governor Tom Wolf proved he is willing to sacrifice the health and safety of Pennsylvanians – even in the midst of the COVID-19 crisis – primarily for the sake of profit.

“Wolf characterized the opportunity for profit from pot commercialization as ‘heaven-sent,’ demonstrating a crass disregard for the health of Pennsylvanians — especially its children and teens,” says Dan Bartkowiak, Director of Communications for Pennsylvania Family Institute. “Marijuana products in legal states are often highly potent and consistently packaged and marketed in ways that attract youth — who are most likely to be negatively impacted and become addicted to the drug. It’s the Big Tobacco strategy of getting lifetime customers, applied to marijuana.”

This is appalling – especially for a Governor and administration whose COVID-19 mandates have stretched Pennsylvanians and our economy to the brink, all in the name of protecting our health and safety. Schools are closed, children and teens are marooned, and Governor Wolf says it’s “heaven sent?”

Wolf added this alarming statement: “I’m not sure how anybody would see this as something that is addictive.” This outright denial of the addictive nature of marijuana is completely contrary to what is demonstrated by numerous health outlets. The Center for Disease Control (CDC) says one in ten marijuana users will become addicted – and if teens start using it their likelihood for addiction goes up to one in six. American Addiction Centers, the nation’s leading provider of addiction treatment, says marijuana is addictive. The Journal of American Medical Association (JAMA) says the cannabis plant has addictive properties. And Dr. Dean Drosnes, Medical Director for Caron Treatment Centers, who specialize in addiction treatment and is based here in Pennsylvania, says there is no question marijuana is a drug that can produce addiction.

“Wolf completely ignores the science surrounding this drug,” states Bartkowiak. “But perhaps that’s typical of someone that’s blinded by the dollar signs. He’s putting profit – as inflated as its projections are – before people’s health and well-being.”

Legalization in other states has shown us that recreational marijuana legalization creates an industry that commercializes and markets highly potent and addictive marijuana products that appeals to children and young adults – a demographic whose brain and body development can be significantly impacted by the use of marijuana.

It’s why it’s all the more discouraging to have Governor Wolf continue to claim that now is the time to legalize recreational marijuana – something even Democratic presidential nominee Joe Biden cautions against. Biden is quoted saying “science matters” and that we should “wait until the studies are done” to find out more about the health implications such as its impact on the developing brain.

The latest science continues to show there are harmful health impacts of marijuana, especially to teenagers. The CDC recently released new research that shows marijuana use is associated with increased prescription opioid misuse among both adults and adolescents. The American Heart Association also recently recommended, “that people not smoke or vape any substance, including cannabis products, because of the potential harm to the heart, lungs and blood vessels.”

On the same day Governor Wolf announced his push for marijuana legalization in his fall agenda, Quest Diagnostics – a leading workplace safety research group – released a new report showing how marijuana legalization could pose heightened risks to the workplace, especially in safety-sensitive positions like construction operations.

Pennsylvania Family Institute points out how any push for recreational marijuana in the middle of a respiratory virus pandemic is not only harmful, but it is also clearly a political agenda taking advantage of the current crisis. The American Lung Association states marijuana use “clearly damages the human lung.” To claim this pandemic is all the more reason to rush into legalization is a blatant manipulation of the current healthcare situation and not in Pennsylvania’s best interests.

During the press conference there was only one projected revenue number given – $600 million, which is from Auditor General Eugene DePasquale’s pre-COVID-19 report that relies upon a 35-percent sales tax. This high sales tax would put Pennsylvania among the highest in the nation. Black market sales are certain to continue, just as they have in Colorado, a state with a much lower sales tax (15% – up from 10% in 2017) than that in DePasquale’s report.

The Auditor General’s report also relies heavily on survey data provided by the Substance Abuse and Mental Health Services Administration (SAMHSA), who also have data showing how legalizing marijuana harms more teenagers. SAMHSA has shown how marijuana use is higher among teenagers in states that have legalized it for recreational use — 50-percent higher in “legal” states than in non-legal states (9.4 percent versus 6.3 percent).

“Let’s not usher in another Big Tobacco, adding more harm to families and to an already burdened health care system in Pennsylvania,” concluded Bartkowiak.

Pennsylvania Family Institute is a statewide non-profit organization that has represented thousands of families across the Commonwealth for over 30 years.