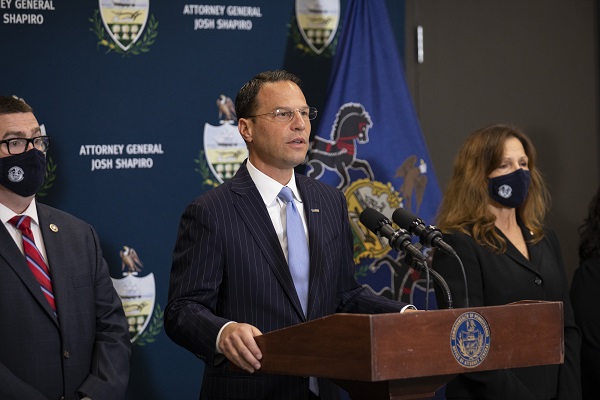 Harrisburg, PA – Attorney General Josh Shapiro announced that Glenn O. Hawbaker, Inc., has pleaded to and been sentenced for theft relating to violations of the Pennsylvania Prevailing Wage Act and the federal Davis-Bacon Act.

The plea includes paying more than $20 million in stolen wages to more than a thousand Pennsylvania workers.

Hawbaker is one of the largest contractors to complete projects on behalf of the Commonwealth, receiving an estimated $1.7 billion in contracts between 2003 and 2018.

The restitution is for the largest prevailing wage criminal case in U.S. history.

“A month ago I met with some of the men and women who had their wages and retirements stolen by Hawbaker — and I told them that we will do everything we can to get them every cent they are owed under the law. A few minutes ago, I was able to tell them that we made good on that promise,” said Attorney General Shapiro. “We took on one of the largest construction companies in the state, and now 1,267 people will have a better shot at retirement; they will get the paychecks they earned under the law; and they will have their work and their livelihoods protected and respected, instead of ignored.”

The Pennsylvania Prevailing Wage Act and the Davis-Bacon Act were enacted to level the playing field and protect workers by ensuring that all contractors working on projects that receive state or federal funding pay the same wage rates, which are determined by state and federal agencies. Contractors are permitted to satisfy a portion of the required wage by providing so-called fringe benefits, such as health care and retirement contributions to employees.

Hawbaker pleaded to four felony counts of stealing wages from its workers. Hawbaker committed this theft by using money intended for prevailing wage workers’ retirement funds to contribute to retirement accounts for all Hawbaker employees – including the owners and executives. They were also charged with stealing funds intended for prevailing wage workers’ health and welfare benefits, and using them to subsidize the cost of the self-funded health insurance plan that covers all employees. The company disguised its scheme by artificially inflating its costs by millions of dollars each year and claiming credit for prohibited costs.

“I’ve heard directly from contractors that follow the law that this enforcement helps their business, and exposing these flagrant examples of wage theft and misclassification will deter employers from engaging in the same illegal schemes. That’s why my office and our partners in law enforcement are committed to this work,” concluded AG Shapiro. “If Pennsylvanians step up to report wage theft, know that my office is here to help. We will advocate for you. The easiest way to report wage theft is to email us at wagetheft@attorneygeneral.gov. If we find another business employing these kinds of schemes, we will fight to get the full paychecks you’ve earned.”

The company was sentenced to five years’ probation and agreed to several other conditions including the appointment of Corporate Monitor Alfred B. Robinson, Jr., former acting administrator for the U.S. Department of Labor Wage & Hour Division, and the payment of $20,696,453 in restitution to 1,267 affected workers. This case was heard before the Honorable President Judge Pamela A. Ruest of the Centre County Court of Common Pleas.