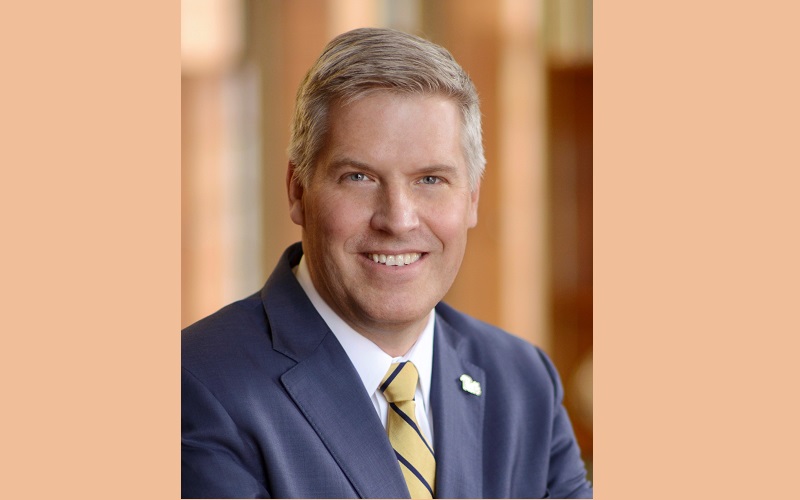 Pittsburgh, PA – University of Pittsburgh Chancellor Patrick Gallagher announced April 7 that he intends to step down as the institution’s 18th chancellor in the summer of 2023, following nine years in office. He will remain at the University as a full-time faculty member in the Kenneth P. Dietrich School of Arts and Sciences’ Department of Physics and Astronomy. The Board of Trustees is expected to kick off a national search process with the expectation of naming Gallagher’s successor prior to his departure.

“Serving as chancellor at one of the greatest public research universities in the nation is deeply fulfilling and rewarding,” Gallagher wrote in a message to the University community. “I am very proud of where Pitt is today, and I think the University is well positioned for a new leader to take the helm and thrive.”

Gallagher, 59, has led the University since he succeeded Chancellor Emeritus Mark Nordenberg in summer 2014. During his time in office, he has launched a suite of groundbreaking student access and affordability programs; raised the University’s reputational profile in academic excellence and research; advanced Pitt’s partnerships and priorities in neighboring communities; added academic offices in sustainability, equity and diversity, and community engagement; founded the School of Computing and Information; and steered the institution through both a pandemic and national recession—all while sparking economic innovation and opportunities in the region, including through initiatives such as Pitt BioForge, an innovative, one-of- a-kind biomanufacturing facility slated for Hazelwood Green.

Mary Ellen Callahan, the vice chair of the Board of Trustees exercising the duties of chair, said: “Pat has that rare set of skills that enable him to see around the corner while also engaging in the day-to-day activities of running a multibillion-dollar organization like the University of Pittsburgh. In this and in many other ways, his tenure as chancellor has been transformational to Pitt. He has been visionary with his plans, pragmatic with his approach, and engaging at every level. I’m incredibly grateful for his time at the helm of the University; his leadership will certainly be missed by many, including me. He is such an important part of the community, so while I am sad to see him step down as chancellor, I am very excited for him to fulfill his calling as a teacher at the University to which he has given so much.”

Louis R. Cestello, vice chair of the Board of Trustees, said: “Pat’s tenure as chancellor of the University of Pittsburgh has been simply remarkable. I admire him greatly, and I try to emulate his principles of compassion and thoughtfulness in my daily life. He is

a brilliant leader who cares about people and inspires everyone around him. He has led this organization through many challenges including the pandemic, which he navigated with courage and compassion. The metrics speak for themselves as every measure from academic caliber to student outcomes has improved during his nine- year tenure. Fortunately, the Pitt community will continue to benefit from Pat’s presence on campus, and he leaves the University with momentum that will carry us forward for years to come.”

Pitt is one of 66 members of the Association of American Universities, and Gallagher chairs the organization’s board of directors. His other active leadership appointments include serving on the Cybersecurity Advisory Committee for the Cybersecurity and Infrastructure Security Agency.

Before joining Pitt, Gallagher spent more than two decades in public service, including serving as director of the National Institute of Standards and Technology and acting deputy secretary of the U.S. Department of Commerce.

In his community message, Gallagher discussed making the leap from the public sector to the helm of one of the greatest public universities in the nation. “When I first assumed this role, following many years of senior leadership positions in government, I made a commitment to myself that I would remain in this role for only as long as I believed that I could carry it out to the fullest of my abilities. When next summer arrives, I will have served as your chancellor for nine amazing years. This is both long enough to have accomplished some great things together, but not so long that I have worn out either myself or my welcome.”

Gallagher’s news was met with both surprise and warm wishes from local university leaders, especially from Kathy Humphrey, who served as the chancellor’s chief of staff, a member of his senior leadership team, and secretary to the Board of Trustees before she departed for Carlow University—to serve as the institution’s 11th president—in the summer of 2021.

Dr. Humphrey said: “Pat’s North Star has always been that universities should not be ‘ivory towers’ but places where students, scholars, businesses and community members can work together to leverage knowledge for society’s gain. It is a vision that he has realized at every turn. His dedication to enhancing access and affordability has built a pathway for countless Pennsylvanians to pursue a Pitt education, and his commitment to supporting the Community Engagement Center model has redefined how Pitt intersects with and invests in our neighbors. His sincere determination to developing a culture of equity, diversity and inclusion continues to transform Pitt. I cherish his leadership and friendship, and I am honored to have worked beside him.”

Gallagher holds a bachelor’s degree in physics and philosophy from Benedictine College in Kansas and a Ph.D. in physics from Pitt. His upcoming move keeps him at an institution he knows very well, in a city he calls home, and in a profession that he loves: teaching.

In his community message, Gallagher described his next chapter at Pitt as “a dream come true.” He also notes that his current reality and many responsibilities won’t be disappearing anytime soon. “While change can be uncomfortable, we are facing it together—from a position of amazing strength,” he wrote. “Meanwhile, 2023 is still a way off, and we have plenty of things to do—together.”

Founded in 1787, the University of Pittsburgh has repeatedly been ranked as the best public university in the Northeast, per The Wall Street Journal/Times Higher Education. A top 10 recipient of NIH funding since 1998, Pitt is a world-renowned leader in health sciences learning and research. The University consists of a campus in Pittsburgh – home to 16 undergraduate, graduate and professional schools – and four regional campuses located throughout Western Pennsylvania. Pitt offers nearly 500 distinct degree programs; serves more than 33,000 students; employs more than 14,000 faculty and staff; and annually awards 9,000 degrees systemwide.