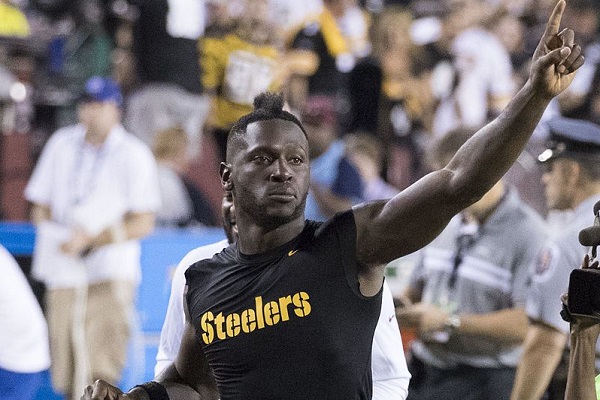 Antonio Brown in 2016 when he was part of Steelers team Keith Allison [CC BY-SA (https://creativecommons.org/licenses/by-sa/2.0)]

Broward County, FL – NFL free agent Antonio Brown is expected to appear before a Florida judge in bond court after a night behind bars.

Brown turned himself in late Thursday night at the Broward County Jail. His lawyer said Brown is innocent of the charges, which include burglary with battery.

A Hollywood police report says Brown and his trainer attacked the driver of a moving truck in a dispute over the $4,000 bill for carrying his household possessions from California.

The wide receiver played nine seasons with the Pittsburgh Steelers before being traded.

Off-the-field incidents derailed his attempts to play for the Oakland Raiders and New England Patriots.

Photo: Antonio Brown at a 2016 game against the Redskins, when Brown had been part of the Steelers team (photo by Flickr user Keith Allison, open to use through Creative Commons)