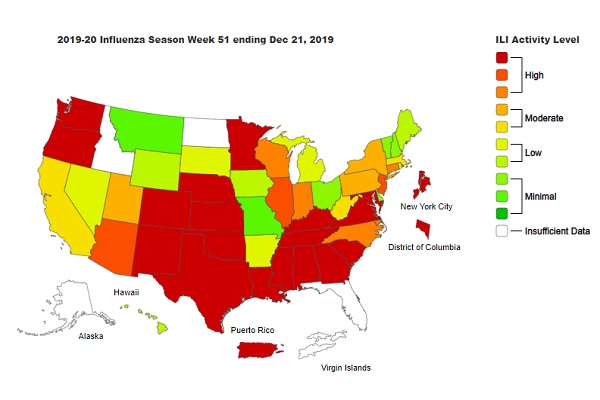 Pennsylvania – According to the CDC, the flu is widespread in Pennsylvania this time of the year.

In comparison to other states, our rate of the flu is moderate.

Here are some tips for identifying, avoiding, and feeling better when you have the flu.

According to the Pennsylvania Department of Health:

What is influenza?
Influenza (also called the “flu”) is a contagious respiratory illness caused by influenza viruses that infect the nose, throat and lungs. It can cause mild to severe illness and, at times, can lead to death. The best way to prevent the flu is by getting a flu vaccine each year.

Influenza is different from a cold. Influenza usually comes on suddenly and may include these symptoms:

fever
headache
tiredness (can be extreme)
dry cough
sore throat
nasal congestion
body aches
How does the flu spread?
Influenza viruses are spread from person to person. This can happen when an infected person coughs or sneezes. Coughs and sneezes produce virus-laden droplets that can spread up to three feet through the air. Flu also can be spread when droplets from a cough or sneeze land on objects like doorknobs, light switches, etc. If others touch the objects and then touch their own mouth or nose (or someone else’s mouth or nose) before washing their hands, the virus can be spread.

How serious is the flu?
Certain people are at greater risk for serious complicationsOpens In A New Window if they get the flu. This includes older people, young children, pregnant women and people with certain health conditions such as asthma, diabetes or heart disease.

The severity of flu seasons varies widely from one season to the next. The number of flu-associated deaths in the United States usually ranges from 3,000 to 49,000 deaths per year but can be much higher if a new strain develops to which no one is immune.

The severity of flu season depends on many things, including:

What flu viruses are spreading;
How much flu vaccine is available;
When vaccine is available;
How many people get vaccinated; and
How well the flu vaccine is matched to flu viruses that are causing illness.
What are the complications of flu?
Complications of flu can include pneumonia, ear infections, sinus infections, dehydration and worsening of chronic medical conditions, such as congestive heart failure, asthma or diabetes.

When can I get the flu vaccine?
Yearly flu vaccination should begin soon after flu vaccine is available and, ideally, by October. However, getting vaccinated even later can be protective, as long as flu viruses are circulating. While seasonal influenza outbreaks can happen as early as October, influenza activity most often peaks in January or later. Since it takes about two weeks after vaccination for antibodies to develop in the body that protect against influenza virus infection, it is best that people get vaccinated to be protected before influenza begins spreading in their community.

Who should get vaccinated?
Everyone 6 months of age and older should get a flu vaccine every season. This recommendation has been in place since Feb. 24, 2010, when CDC’s Advisory Committee on Immunization Practices (ACIP) voted for “universal” flu vaccination in the United States to expand protection against the flu to more people. Vaccination to prevent influenza is particularly important for people who are at high risk of serious complications from influenza.