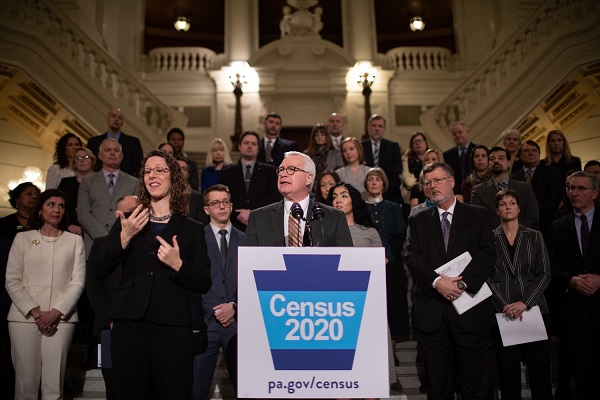 Director Barry L. Denk, Center for Rural Pennsylvania, speaking in the Pennsylvania Capitol Rotunda. Today, officials from the Wolf Administration including Second Lady Gisele Fetterman, representatives from the Department of Community of Economic Development (DCED), and Department of Human Services (DHS) Secretary Teresa Miller joined state officials, stakeholders, and others at a Capitol rally to urge Pennsylvanians to participate in the 2020 U.S. Census this year. Harrisburg, PA – January 13, 2020

Harrisburg, PA – Recently in Harrisburg, officials from the Wolf Administration including Second Lady Gisele Fetterman, representatives from the Department of Community of Economic Development (DCED), and Department of Human Services (DHS) Secretary Teresa Miller joined state officials, stakeholders, and others at a Capitol rally to urge Pennsylvanians to participate in the 2020 U.S. Census this year.

“In Pennsylvania, everyone counts, and that’s why we need to ensure that everyone living in the commonwealth participates in the 2020 U.S. Census,” said DCED Secretary Dennis Davin. “Our representation and billions of dollars of funding for critical resources depend on an accurate count of all residents, no matter who they are or where they live.”

Through the U.S. Census count, Pennsylvania receives $26.8 billion annually for federally funded programs, amounting to about $2,000 per Pennsylvanian per year.

During the rally, Second Lady Fetterman also announced her new statewide Census tour set to launch later in January. The tour will take her to all regions of the commonwealth over the next three months, meeting with hard-to-count populations and spreading the word about the importance of participating in the Census. Tour stops will include: Philadelphia, Centre, Erie, Allegheny, Lancaster, and Luzerne counties.

“Having spent my career working to address issues of equity, I understand how the individuals at the greatest risk of not being counted are the same ones who would be disproportionately affected by an inaccurate count,” said Second Lady Fetterman.

Through the U.S. Census count, Pennsylvania receives $26.8 billion annually for federally funded programs, amounting to about $2,000 per Pennsylvanian per year.

• More than $1.68 billion in funding authorized by the 2015 Fixing America’s Surface Transportation Act, the largest portion of it designated for maintenance of national highways and construction and repair of bridges and other highway facilities;

• More than $365 million allocated to the Children’s Health Insurance Program;

• Education assistance, including more than $5 billion for Federal Direct student loans, $840 million for the Federal Pell Grant program, $567 million in Title I grants for schools, and $436 million in special education grants.

“The Department of Human Services administers many of the critical programs to families that are funded according to Pennsylvania’s Census count, and we simply cannot afford to jeopardize that funding or those programs,” said DHS Sec. Miller. “For the health and safety of our residents, for the health and safety of our communities, this funding must be preserved; and to do that, everyone must be counted.”

Residents can respond to the form by mail, by phone, and for the first time ever, online.

Most households will receive their census invitation in the mail by April 1, 2020. Households that are in remote areas or use a P.O. Box will be visited in person by a Census taker.

Beginning in April 2020, Census takers will visit college campuses, senior centers, and group homes. In May, the Census Bureau will begin visiting those who have not responded. Population counts will be submitted to the federal government in December 2020.

Residents do not need to be concerned about safety and security, as Census answers can’t be used against an individual, and data security is managed by security experts operating at the highest levels.

Under Title 13 of the U.S. Code, the U.S. Census Bureau cannot release any information that identifies individuals, and anyone who breaks this law faces a fine of up to $250,000 and/or up to five years in prison. Your voice matters in shaping Pennsylvania’s future.