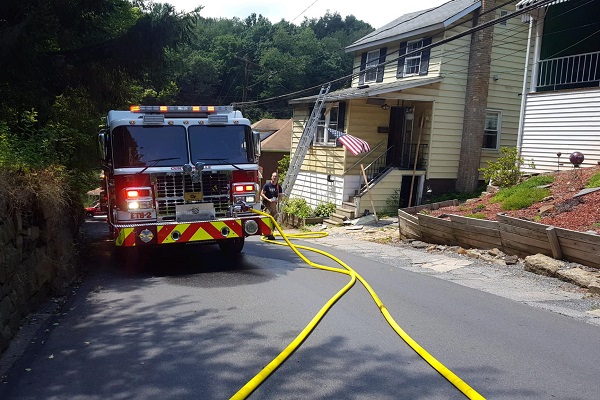 Company 8 Rescue Hose and Ladder got called to a home on Bailey Road in Curwensville just after noon Sunday for a tree that had snapped a nearby power line.

Crews found that, as the power line fell, it made contact with a roof and started a small fire. The line break also caused a power surge, melting multiple outlets and tripping several circuit breakers.

Fire crews worked for about two hours, putting out the active flames and using thermal imaging to make sure the house was safe before turning it over to Penelec.

**Downed Lines Cause Fire**
Sunday at 12:04, Company 8 was dispatched for a tree and power lines down along Bailey Road in Curwensville Borough. Shortly before the response of apparatus, county dispatch upgraded the alarm to a possible structure fire at the same address. Engine Tanker 8-2, Engine Tanker 8-1, Rescue 8-2, 852, and MedCom 8 responded. Crews arrived to find a tree down beside a residence that had snapped a nearby power line. The breaking of the line surged power to the residence, melting multiple outlets, and subsequently tripping several circuit breakers in the residence. Crews also found that as the power line fell, it made contact with a porch roof to the residence, causing a fire. Chief 8 assumed command and fire crews went to work opening up areas of the roof and extinguishing active fire. The rest of the residence was thoroughly checked with a thermal imaging camera to ensure there was no other threat of fire to the residence. Crews then removed the part of the tree down from around the downed lines. Mutual Aid units from Company’s 1, 5, 6, and 9 were dispatched to the incident but subsequently cancelled. Company 8 operated for two hours before the scene was turned over to Penelec.