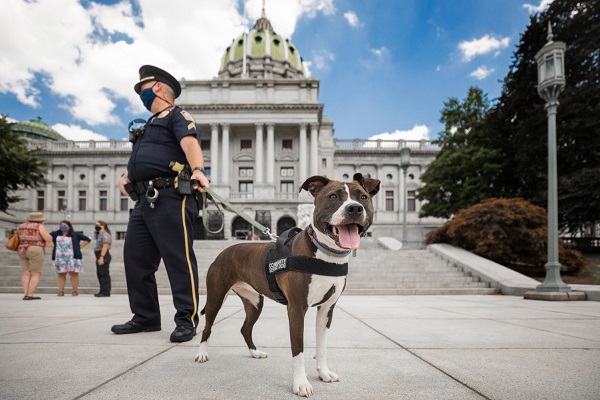 Pennsylvania State Police Sgt. Mike Schmidt, stands with Cappy, the Capitol Police public service dog, following a press conference, detailing the Bureau of Dog Law Enforcement’s impending funding crisis, the implications for public safety and animal welfare, and how the crisis can be averted, on the capitol steps on Wednesday, August 5, 2020.

Harrisburg, PA – Funding is running out for the Bureau of Dog Law Enforcement, and officials say the best way to raise more money is to increase the price of dog licenses, which have stayed at the same price for the past 24 years.

In addition to a minimal fee increase, these bills seek to lower the age at which a dog must be licensed from 3 months to 8 weeks, the age at which puppies can be transferred to a new owner.

Read the press release and see the video from Pennsylvania government officials.

“Dog licenses are a simple, inexpensive measure that funds our work to return lost dogs to their owners, ensure that dogs in kennels are humanely treated, and communities kept safe from dangerous strays and irresponsible dog owners,” said Sec. Redding. “Simply put, that funding has run out. A small fee increase for the privilege of owning a dog can help protect those very dogs from harm.”

“The Bureau of Dog Law Enforcement is on life support, and the Humane Society of the United States encourages the General Assembly to make adequate funding available to ensure that our furry friends’ health and welfare, as well as the public’s health and safety, is protected,” said Tullo.

Annual dog license fees make up nearly 90 percent of the bureau’s funding. Dog license fees have not increased in 24 years. Sen. Schwank and Rep. Pashinski have sponsored Senate Bill 663 and House Bill 1504, respectively, proposing to bring dog license fees in line with other costs of living increases over the past 24 years.

In addition to a minimal fee increase, these bills seek to lower the age at which a dog must be licensed from 3 months to 8 weeks, the age at which puppies can be transferred to a new owner. This would help increase awareness among dog owners of the legal requirement to license a dog.

“The bureau offers important services that need funding,” Sen. Judy Schwank said. “Without intervention, this department will lose its ability to function. This puts puppies, dogs and people at risk.”

Without the passage of this long awaited legislation, the public will experience uncontrolled dogs.

“It’s been 24 years since we last increased dog license fees and the fees are critical to protect dog owners and the general public,” said Rep. Eddie Day Pashinski. “Without the service of the Bureau of Dog Law, we could see packs of stray dogs wreaking havoc in small communities, which was a problem we used to have. My bill not only creates a modest license fee increase to allow for the Bureau to continue day-to-day operations, but it also lowers the license age to 8 weeks of age which is pivotal to getting more dogs licensed and into the system.”

showing the state’s Bureau of Dog Law Enforcement has been deprived of the resources it needs to keep dogs safe.

“The General Assembly has made some important changes to animal protection laws, but too little attention has been given to making sure dog law enforcement is adequately funded to protect the health and safety of all dogs,” Auditor General DePasquale said. “We must make sure our dog wardens have the resources they need to do an effective job.”

The special report notes that although the bureau has sold more licenses in recent years, the sales increase has not been enough to offset the rising costs of operation. Hiring fewer dog wardens and other cost-saving and efficiency measures have helped the bureau delay a negative fund balance. But the fund will be in the red in September and will no longer support bureau operations.

Learn more about dog licensing in Pennsylvania at licenseyourdogpa.pa.gov