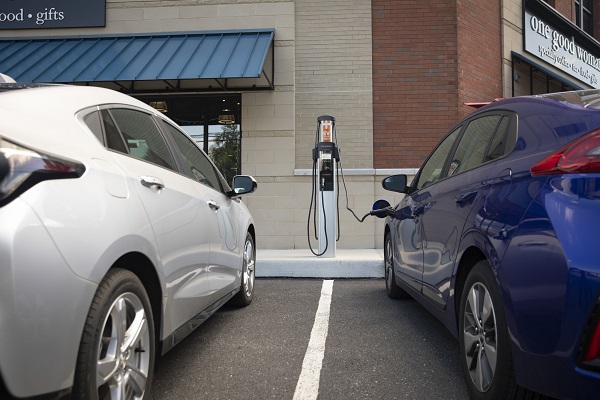 “Each one of these chargers adds another option for Pennsylvania’s electric vehicle drivers, and more electric vehicles on the road means less tailpipe pollution and healthier air quality in our communities,” said McDonnell. “It also helps Pennsylvania address the pressing challenge of climate change.”

While charging his car in the parking lot, Secretary McDonnell visited One Good Woman coffee/tea shop to talk with Neighbors & Smith property manager David Hutton and shop owner Michele Koch about the benefits of supporting customers’ and employees’ electric vehicle use.

“Smith Land & Improvement Corporation is proud to offer two electric vehicle charging stations at its newest development in Camp Hill—Neighbors & Smith,” Hutton said. “These charging stations not only offer convenience to our tenants, shoppers, and community, but they show Smith Land’s commitment to the evolving auto industry and the environment.”

Driving PA Forward-funded chargers have been installed by companies, organizations, and condo/apartment complex owners at more than 300 locations in 39 counties in a variety of communities across the state, including in Philadelphia, Pittsburgh, Allentown, Braddock, Harrisburg, Oil City, Pottsville, Tunkhannock, and many other communities.

“The charging station in Oil City provides residents and visitors alike a much-needed public space to charge their vehicle,” said Emily Lewis, executive director of the Venango County Economic Development Authority. “Being one of just a few public charging stations in the area, it draws travelers to downtown Oil City and provides a necessary link for electric vehicle users making long trips in the region.”

“The Allentown Parking Authority understands electric vehicles are part of the future. We’ve had some large corporations moving their companies downtown, bringing contract parkers. They were thrilled at the installation of our charging stations,” said Janet Canevari, management specialist at the Allentown Parking Authority, Lehigh County. “Our goal is to provide the best parking experience to Allentown’s residents, workforce, and visitors as we play a part in reducing the carbon footprint.”

“Electric vehicles are the biggest thing to happen to transportation since the Model T. We’re honored to be on the leading edge of bringing this revolutionary technological change to rural areas,” said Matthew J. Austin, president and CEO of Austin-Corps, located in Tunkhannock, Wyoming County. “Making charging stations available at public locations is key to overcoming perceived battery anxiety on the way to environmentally sustainable transportation.”

More than half the chargers were installed at public places, about one-third at workplaces, and the remainder at multi-unit residential properties. The Pennsylvania Department of Conservation and Natural Resources (DCNR) has completed 12 charging projects at state parks with Driving PA Forward funding.

An additional 140 funded charging station projects are in process. They’ll add at least 500 more plugs and bring the number of counties to 45 with at least one charger funded by Driving PA Forward.

“We know Pennsylvanians are increasingly interested in electric vehicles for their health and environmental benefits, as well as lower fueling and maintenance costs,” said Secretary McDonnell. “Many people are asking, is the charging infrastructure in place to let me go where I want to go? Companies, local governments, and organizations are stepping up to fill this need.”

There are now more than 1,600 public Level 2 chargers that can be used by any vehicle at more than 800 locations throughout the state.

Information on how to apply for funding to install a Level 2 charger may be found at Driving PA Forward and in this brochure. The Level 2 program is one of eight Driving PA Forward programs that are using Pennsylvania’s $118.5 million settlement from the Volkswagen emissions cheating scandal to drive the transition toward zero- and low-emission vehicles and equipment and accelerate installation of related infrastructure. Driving PA Forward is investing the maximum amount allowed by the settlement to support charging infrastructure: nearly $17 million.

Vehicles generate 47% of nitrogen oxides in the air statewide, contributing to the formation of ground-level ozone. This affects the health of children; older people; people with lung diseases, such as asthma and emphysema; and those who work or are active outdoors. The Pennsylvania Department of Health has found that asthma-related emergency room visits increase when air quality is very poor.

Vehicles release 21% of carbon dioxide in the air statewide, contributing to climate change.