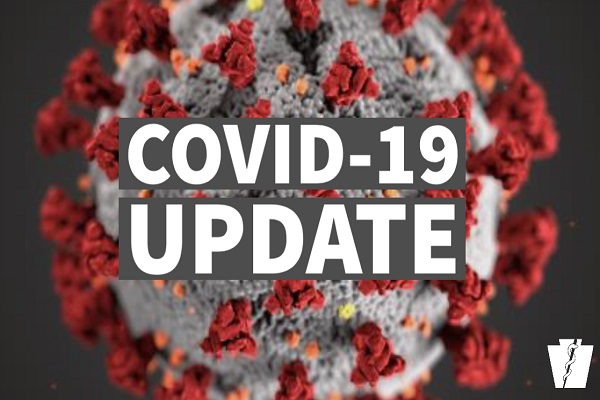 Pennsylvania – The statewide percent-positivity went down to 8.0% from 8.6% last week. We now are seeing three counties who have a positivity rate lower than five percent. There are no counties reporting over 20 percent positivity rate.

“We are reporting another week of lowered statewide positivity, which is an encouraging sign of as we continue our COVID-19 response,” Gov. Wolf said. “Across the commonwealth, we are getting vaccine into arms to ensure our residents are protected against COVID-19 exposure, but there is still community spread ongoing in our communities, so we cannot get inpatient. We need to stay the course to best fight this virus.”

As of Thursday, February 11, the state has seen a seven-day case increase of 19,621 cases; the previous seven-day increase was 20,815 cases, indicating 1,194 fewer new cases across the state over the past week compared to the previous week.

The statewide percent-positivity went down to 8.0% from 8.6% last week. We now are seeing three counties who have a positivity rate lower than five percent. There are no counties reporting over 20 percent positivity rate.

“The Department of Health is laser-focused on working with trusted local providers to get vaccine in arms as quickly as it is available from the federal government as we continue our COVID-19 response,” Acting Sec. of Health Beam said. “The importance of the proven health practices and mitigation efforts remain important. While we await more vaccine, we encourage people to prevent the spread of COVID-19 by wearing a mask, washing hands and maintaining social distance.”

Community Transmission
As of Friday’s data, 51 counties were in the substantial level of community transmission, the highest level of transmission.

Business Visits
The Department of Health provides weekly data on the number of individuals who responded to case investigators that they spent time at business establishments (restaurants, bars, gym/fitness centers, salon/barbershops) and at mass gatherings 14 days prior to the onset of COVID-19 symptoms.

It is important to note that due to the number of cases, the department is prioritizing case investigations to prevent outbreak. In addition to the need for people to answer the call, the significant number of cases helps contribute to the low percentages in case investigation data. All of this reinforces the need for Pennsylvanians to take steps to prevent the spread of COVID-19.

Of the 24,884 cases reported between January 31 – February 6 and excluding Philadelphia County residents and those who answered the digital case investigation, 11.9 percent (3,067) provided an answer to the question as to whether they spent time at a business establishment.

Of those who did provide an answer, 1.3 percent, or 333, answered yes, they visited a business establishment 14 days prior to onset of symptoms:

In addition to the traditional case investigation, the Department of Health launched the new Connect & Protect Form as a means to complete a digital case investigation. During the week of January 30 – February 6, there were 1,101 forms completed and returned. Of the 99 percent, or 1,086 people, who answered whether they spent time at any business establishment two days before symptom onset or positive collection date if asymptomatic, 14.5 percent, or 160 individuals, individuals answered yes:

The numbers above highlight business settings and mass gatherings as possible sites for transmission. It is important to note that currently Pennsylvania is experiencing widespread community transmission. With less than 10 percent of those asked about what types of businesses they visited or if they attended a mass gathering responding to the question, the department is again reminding Pennsylvanians that it is essential that they answer the phone when case investigators call and to provide full and complete information to these clinical professionals or on the Connect & Protect form the case investigator provides.

Travel Recommendations
The Department of Health, along with the Centers for Disease Control and Prevention, continue to discourage any nonessential travel, even for people who are fully vaccinated.

In November, the Department of Health provided an updated travel order requiring anyone over the age of 11 who visits from another state to provide evidence of a negative COVID-19 test or place themselves in a travel quarantine for 14 days upon entering Pennsylvania. Travel quarantine guidance was changed to 10 days on Dec. 5 based on new CDC guidance.

It is important that people understand that this Order is in place to prevent the spread of COVID-19 in Pennsylvania. A concerning number of cases have been linked to travel, and if people are going to travel, we need them to take steps to protect themselves, their loved ones and their community, and that involves having either a negative test, or placing themselves in a quarantine.