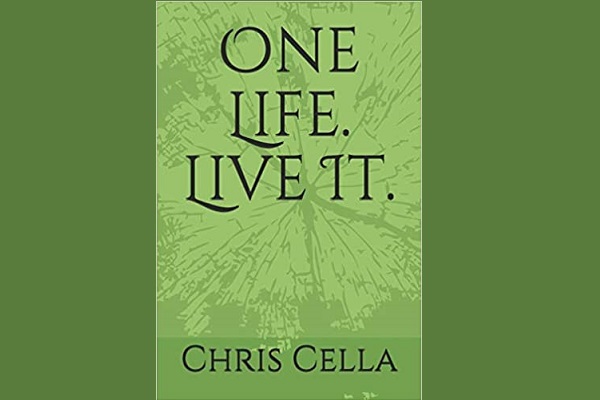 Brockport, PA – After 20 years of competition boxing and bare-knuckle boxing, Brockport resident Chris Cella made the decision to hang up the gloves for good. In doing so he rediscovered a passion inside of him that had been manifesting since the age of six… writing.

“When Covid hit, each and every person was affected in their own way,” said Cella. “For my family and I, it was accepting the realization that the gym we had build for the ground up would no longer thrive the way it once had. So I decided to make use of the extra time and return to something I have always loved, and picked up a pen and resumed a story I had started years ago.”

An avid reader and writer of horror books, specifically Stephen King and Dean Koontz, Cella has penned countless short stories and manuscripts within the genre, but for the first time he stepped outside of his comfort zone and wrote a drama story, One Life. Live It.

“One Life. Live It. was a story I started back in 2013, but the life of being a husband, dad and gym owner took over and I put it on the back burner,” Cella continued. “But one day over Thanksgiving weekend the premise of the story surfaced once again, and I saw it all play out in my head. At the time I had decided to walk away from competition boxing for good and was excited to finish the book.”

Cella worked diligently to complete the short book, telling the story the way he would want to read it, direct and concise.

“When I came back to One Life. Live It. I thought long and hard about making it meaty and a long drawn-out novel, but it did not feel right. I wanted to tell the story as direct as possible, keeping the reader hooked leading up to the last page.”

Upon finishing he published the book on Amazon and several other websites.

“Holding my book in my hand for the first time was an incredible feeling,” said Cella. “The first time a boxer laces up the gloves they dream about one day winning a belt, just as every time a writer starts a story, they dream of one day seeing it in print.”

As a competitive boxer Cella established an unblemished record in amateur, professional and bare-knuckle boxing, claiming the Bare-Knuckle Middleweight Belt in 2015 and the WBB Junior Middleweight Gloved Boxing Title in 2018.

“I’ve accomplished everything I had ever envisioned in the fight game. I am grateful for every experience, but I knew back in November I was done. As amazing it was to be crowned a champion in both bare knuckle boxing and gloved boxing, it was nothing near the feeling of holding my book in my hand and showing it to my daughters.”

Cella added he also wrote a children’s book for his two daughters, Giada and Mia, which he is working on getting published, as well a horror short story, The Savage Road, which is also available on Amazon.

“Probably the most gratifying moment of my life is when my six-year-old Giada sat down on the couch with me and read to me the children’s book I wrote, The Adventures Of Foxy and Loxy.”

A husband to Becky, and a dad to Mark, Giada and Mia, Cella said that while he continues to train and run classes at BC Boxing, his focus is on his family and writing.

“I would love to walk into a local store one day and see One Life. Live It. on the shelf, but at the end of the day, I write because I love it. It’s a passion I’ve held onto since the age of six, and the results I’ve garnered as an author have completely outshined my greatest moments as a fighter.”

To learn more about One Life. Live It., as well as Cella’s other stories, visit his page on Amazon at https://www.amazon.com/Chris-Cella/e/B08PTBDKXB/ref=dp_byline_cont_ebooks_1.