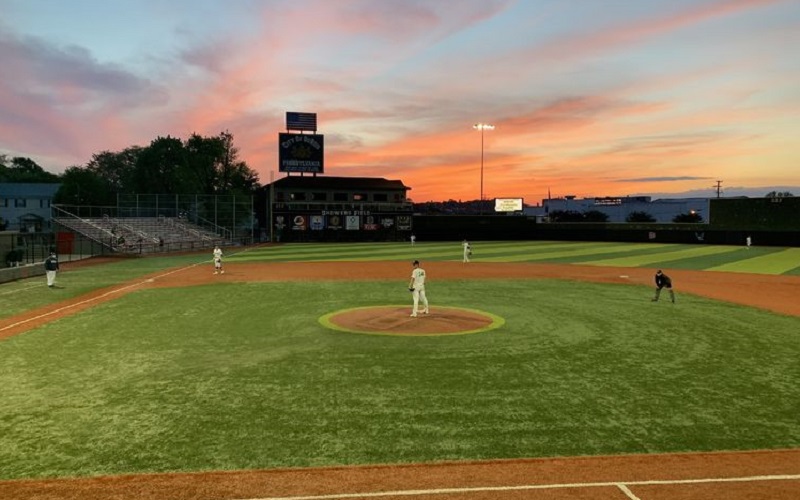 DuBOIS, Pa. — You might have heard of the saying “it’s bigger than sports,” and for so many college towns that holds true. The saying takes on a unique meaning for the Penn State DuBois baseball team, not only because of what the team means to the people of DuBois, but also because of what the town means to the baseball program and how they impact one another on a stage that is much larger than the field they play on.

Nestled in the heart of Pennsylvania, about 100 miles northeast of Pittsburgh, is the city of DuBois. Another 60 miles to the east is State College — a mesmerizing college town that hundreds of thousands call home on Saturdays in the fall. Penn State’s University Park campus may have all the bells and whistles of a Division I institution, but what exists in DuBois cannot be matched with money, facilities or nationally televised games.

“Baseball was always a love for me. Growing up, DuBois was a baseball town from their little league programs up through high school,” said former shortstop and starting pitcher Caleb Bennett. “When I heard Coach [Calliari] was starting up the program, I knew he was a great fit to carry on that tradition into the college baseball scene.”

Everyone was hungry. The competition at practice and the amount of productivity that was accomplished was night and day compared to what I had experienced.

The baseball team at Penn State DuBois had been dormant for 21 years until the campus decided to restart the program with a new coach and a roster built from scratch. Head Coach Tom Calliari knew how to build the groundwork. As a native of nearby Brockway, Calliari was a talented baseball player in his own right at Lock Haven University before diving into the coaching ranks. In 1996, he served as an assistant coach for Penn State’s Division I team that captured the Big Ten championship. He then went on to coach at Division III Greensboro College in Greensboro, North Carolina, where he helped lead the team to a Dixie Conference Championship. Calliari also served as the manager of Keystone Baseball Academy, a wooden bat summer league made up of college baseball players from across the state of Pennsylvania, where he led his teams to a 157-59 record over six seasons.

Senior catcher Dan Stauffer painted a picture of his first-ever practice at DuBois and how Calliari’s style has created healthy competition among his players.

“The atmosphere that I was exposed to at practice was nothing that I had ever experienced before. It is hard to describe the atmosphere without actually experiencing it for yourself,” said Stauffer. “It was something that I quickly learned to embrace. Everyone was hungry. The competition at practice and the amount of productivity that was accomplished was night and day compared to what I had experienced [previously]. … I just was totally able to buy into the program and I’m thankful every day that I did.”

Through enhanced recruiting, diligent practices, and paying attention to the little things, the Penn State DuBois baseball team found success in short order. The team improved on its inaugural season in 2015-16 and captured the United States Collegiate Athletic Association (USCAA) national championship three years in a row: 2017-18, 2018-19 and 2020-21.

I believe the success is a testament to the brotherhood and character that Coach Calliari has instilled into his teams. Being able to win multiple national championships is truly a dream come true and we wouldn’t have been able to do it without everyone buying in and playing for the guy beside him.

“I believe the success is a testament to the brotherhood and character that Coach Calliari has instilled into his teams,” said current shortstop and pitcher Trevor Hanna. “Being able to win multiple national championships is truly a dream come true and we wouldn’t have been able to do it without everyone buying in and playing for the guy beside him.”

“People can say little things matter, but you have to be able to back it up with little things,” said Calliari on why his life motto has been focused around why little things matter. “As the leader, I have to make people responsible for the little things. A lot of it can be overlooked and people will say ‘it’s not a big deal that he’s not wearing a belt at practice’ — not this guy.”

The team competes in the Penn State University Athletic Conference on a regional level, which feeds into the national governing body for more than 70 small colleges and universities, known as the United States Collegiate Athletic Association. The USCAA exists to give smaller institutions the opportunity to play for national championships and student-athlete recognition. The association organizes championships for a number of sports, including baseball and softball, which were held separately until 2018. With baseball hosted in Springfield, Illinois, and softball held in Akron, Ohio, the idea to bring the two together and form a championship week arose after the city of DuBois constructed a brand new softball field to match the upgrades put into the city’s baseball complex.

The marquee event for baseball and softball was dubbed the “Small College World Series” in 2018 and has been a hit with the local community, while also having a considerable impact on its small businesses, restaurants and hotels.

As the leader, I have to make people responsible for the little things. A lot of it can be overlooked and people will say ‘it’s not a big deal that he’s not wearing a belt at practice’ — not this guy.

“This is a huge event for not only DuBois, but for the entire area. The hotels that are used stretch from Brookville to Clearfield. Every restaurant should benefit from us having this event. It really gives us the opportunity to show people from around the country what we are about here in DuBois,” said John “Herm” Suplizio, DuBois city manager, when asked what the USCAA Small College World Series means to the area. “Each year the event generates just under $500,000 in economic impact for the city and region and gives a nice boost of business for so many during the spring.”

In 2021, the USCAA Small College World Series was named a “Mid Market Champion” in Sports Destination Management, a leading publication for sports event planners and tournament directors that highlights professional, college and local venues; sporting events; and successful strategies across the industry. In addition, Showers Field was featured in Major League Baseball’s 2021 Opening Day video, which welcomed fans back to the ballparks after a season of empty seats in 2020.

Baseball and softball teams from across the country have their sights set on this year’s edition of the Small College World Series, which will take place from May 15-19 at Showers Field and Heindl Memorial Field in DuBois. The Nittany Lions know they have a target on their backs as they look to defend their 2021 USCAA national title. Led by a coach who connects with his players beyond the confines of a baseball diamond, the small-town team’s success epitomizes why little things matter.