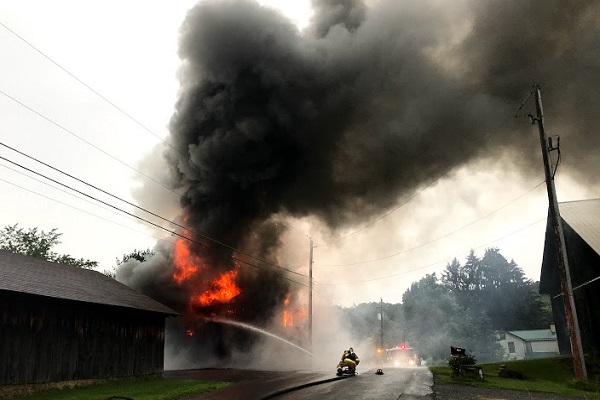 Pike Township, PA – A barn was destroyed in a fire after it was struck by lightning near Curwensville over the weekend.

On Saturday afternoon around 4 p.m., fire crews were dispatched for a barn fire on Schofield Street Extension in Pike Township.

Initial reports say it started after a lightning strike. Crews arrived the find the barn already full involved, and goal changed from being able to save the barn to simply being able to stop the flames from spreading to any other building.

Thanks to efforts from multiple fire departments, the majority of damage was able to be contained to the building of origin due to quick response times and aggressive suppression. Crews worked on scene for approximately 2 hours.

Although there’s no official report yet, the barn appears to be a complete loss. There were no injuries and there seemed to be no animals inside the barn at the time of the fire.

*** Working Fire***
Saturday at 16:02, Company 8 was dispatched for a structure fire along Schofield Street Extension in Pike Township. Initial reports advised of a barn that was struck by lighting with flames showing. Engine Tanker 8-2, Engine Tanker 8-1, Rescue 8-2, 851, 853, and MedCom 8 all responded. Crews arrived to find a barn, well involved, and Chief 8 assumed command. Crews placed into service 2 attack lines and 2 blitz fires. Engine 1 established a fill site and a tanker shuttle operation was conducted to feed both engines. Thankfully the majority of damage was able to be contained to the building of origin due to quick response times and aggressive suppression. Both of Company 8’s engines arrived on scene less than 4 minutes from dispatch. Crews worked on scene for approximately 2 hours. Other units on scene included Engine 5, Squad 5, Engine 1, Engine Tanker 6, Truck 6, Engine Tanker 9, Engine 9, Tanker 7, Squad 7, Tanker 30, Engine Tanker 40, Tanker 40, Jefferson Tanker 10, and Jefferson Rescue 10. Tanker 23 also responded but was cancelled while enroute. Thanks to Jefferson Squad 8 for standing by in our station during the duration of the incident.
Thanks to all mutual aid companies for their assistance today.
Lawrence Township Volunteer Fire Company #1
Clearfield Fire Dept.
Hyde Fire Department
Grampian Penn Bloom Vol. Fire Company
Brady Twp. Fire, Rescue and Ambulance Inc.
Union Township Fire Company
Houtzdale Fire Company No. 1
Pine Creek Volunteer Fire Department
Sykesville Fire Department